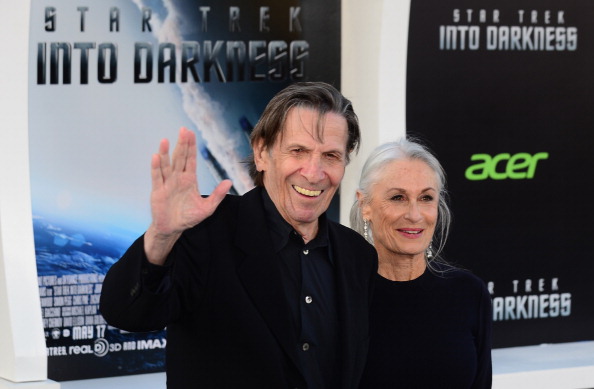 Leonard Nimoy, the actor who played Mr Spock on Star Trek, died at age 86. Leonard Nimoy of Mr. Spock fame died on Friday at age 83. But did you know that he recorded several albums and authored a few books? (FREDERIC J. BROWN/AFP/Getty Images)
Entertainment

Leonard Nimoy Had Albums and Books: ‘I Am Not Spock’

Leonard Nimoy of Mr. Spock fame died on Friday at age 83. But did you know that he recorded several albums and authored a few books?

In the first book, he talked about his struggled with being identified with his logic-driven character.

Who is this man?
To a watching world he is the logical, powerful, stalwart first officer of the Starship Enterprise – the adored object of millions of Star Trek fans.

For 3 years, 12 hours a day, 5 days a week, he functioned as the half-Human, half-Vulcan Mr. Spock, an extraterrestrial. He is not. He is Leonard Nimoy. An actor. A teacher. A writer. A father. A husband. A real flesh-and-blood human being.

Now while the phenomenal popularity of Star Trek still grows, Nimoy doffs the pointy ears and placid face and reveals himself totally – his relationship with fellow actors; the backstage frenzies; the near-cancellation of Star Trek; the lean years; the loneliness, the battles and the ultimate struggle to survive his own success!

Later, “I Am Spock” was an obvious reference to his autobiography.

He also directed several films, including the hit comedy “Three Men and a Baby” and appeared in such plays as “A Streetcar Named Desire,” ”Cat on a Hot Tim Roof,” ”Fiddler on the Roof,” ”The King and I,” ”My Fair Lady” and “Equus.” He also published books of poems, children’s stories and his own photographs.

But he could never really escape the role that took him overnight from bit-part actor status to TV star, and in a 1995 interview he sought to analyze the popularity of Spock, the green-blooded space traveler who aspired to live a life based on pure logic.

People identified with Spock because they “recognize in themselves this wish that they could be logical and avoid the pain of anger and confrontation,” Nimoy concluded.

“How many times have we come away from an argument wishing we had said and done something different?” he asked.

In the years immediately after “Star Trek” left television, Nimoy tried to shun the role, but he eventually came to embrace it, lampooning himself on such TV shows as “Futurama,” ”Duckman” and “The Simpsons” and in commercials.

He became Spock after “Star Trek” creator Gene Roddenberry was impressed by his work in guest appearances on the TV shows “The Lieutenant” and “Dr. Kildare.”