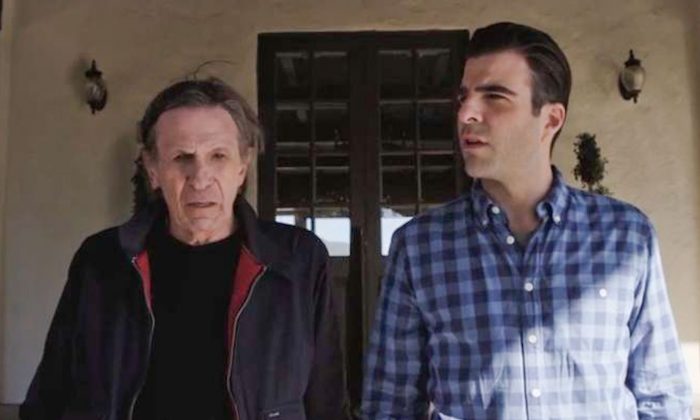 Leonard Nimoy versus Zachary Quinto: In a new Audi commercial, the actors who play Spock in the new Star Trek movies, engage in a humorous race to a golf course.

Nimoy, 82, plays the somewhat frumpy older man, struggling to wedge his golf clubs into an unaccommodating trunk, bopping along the road as he drives, singing the “Ballad of Bilbo Baggins,” a song composed by Charles Randolph Grean and first performed by Nimoy in the ’60s.

“Bilbo, Bilbo Baggins, the bravest little hobbit of all,” sings Nimoy, as Zachary Quinto—who plays the younger version of Spock in the Star Trek movies—zips along and navigates with Audi gadgets cast as spacecraft-like.

“I feel like I’m stuck in a black hole,” Nimoy says.

We won’t ruin the end. Watch for yourself.

Leonard Nimoy got his start in Hollywood at the age of 20 with a part in Queen for a Day (1951), according to the International Movie Database (IMDb). Star Trek has been his main gig over the decades, but he has had some other roles, for example, he played Mustafa Mond in NBC’s production of Aldous Huxley’s Brave New World in 1998.