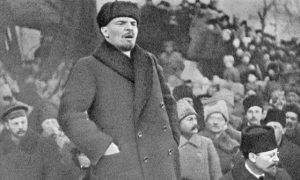 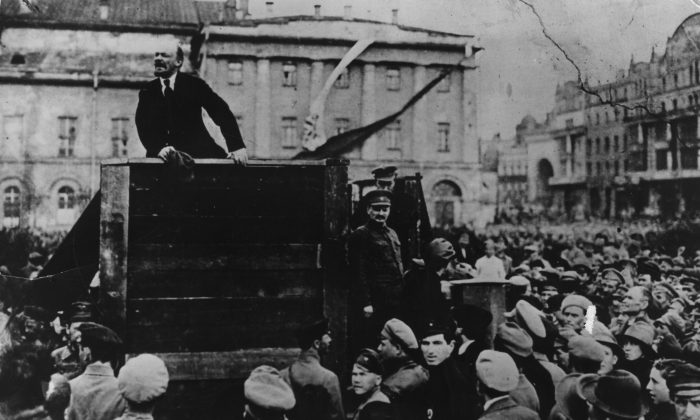 Russian communist revolutionary leader, Vladimir Lenin (1879 - 1924), giving a speech in to men of the Red Army leaving for the front, during the Polish-Soviet War, Sverdlov Square (now Theatre Square), Moscow, 5th May 1920. On the right of the platform are People's Commissar Leon Trotsky (1879 - 1940) and Politburo member Lev Kamenev (1883 - 1936). (Keystone/Getty Images)
Viewpoints

Lenin’s Hero Nechayev: The Evilest Communist Who Ever Lived?

Whether consciously aware of it or not, every communist dictator, butcher, torturer, and terrorist of the past century and a half owes a debt to Sergey Gennadiyevich Nechayev.

Nechayev is known for pioneering the concept of the “professional revolutionary.” Vladimir Lenin’s elder brother, Aleksandr Ulyanov, who was executed after a failed assassination attempt on Czar Alexander III, was part of an organization inspired by Nechayev.

In the 20th century, several revolutionary groups, including the Black Panther Party and Germany’s Red Brigades, all drew inspiration from Nechayev, who was often referred to as the “Bolshevik before the Bolsheviks.” Lenin himself was highly influenced by Nechayev, often referring to him as the “titan of the revolution” and further urged all communist revolutionaries to read his work.

Lenin was right. To truly understand communism, one must read Nechayev.

Nechayev was born on Sept. 20, 1847, in Ivanovo, Russia, about 150 miles from Moscow and 60 miles from Yaroslavl, where former mayor and current presidential candidate Bernie Sanders would honeymoon 121 years later, and which he eventually would name as a “sister city” to Burlington, Vermont.

As a young teenager, Nechayev learned from his father to wait tables at banquets and paint signs, but he quickly rebelled against serving the rich and advertising their wares. When he was 18, Nechayev moved to Moscow, and then on to St. Petersburg, where he attended lectures at the university, although he was never officially enrolled. There he became familiar with the writings of the organized revolutionaries known as the Decembrists, as well as the Petrashevsky Circle and the famed anarchist Mikhail Bakunin.

Russia’s young intelligentsia was in a state of ferment at the time. Revolutionary sects and underground presses kept the Czarist secret police trying to keep a lid on everything. Nechayev did his best to blow that lid.

‘Catechism of a Revolutionary’

Nechayev took part in devising the student movement’s “Program of Revolutionary Action,” which named “social revolution” as its ultimate goal. The program laid out plans for creating a revolutionary organization and conducting covert subversive activities.

This program was the root of Nechayev’s most famous work, the 1869 dark masterpiece “Catechism of a Revolutionary.”

While only a few hundred words long, “The Catechism” has become a legendary revolutionary work. Former Black Panther Party leader Eldridge Cleaver referred to it as his “bible”:

“I took the Catechism for my bible and … I began consciously incorporating these principles into my daily life, to employ tactics of ruthlessness in my dealings with everyone with whom I came into contact. And I began to look at white America through those new eyes,” he wrote in “Target Zero: A Life in Writing.”

In Catechism, Nechayev lays out his philosophy of revolution. It’s breathtakingly bleak in its embrace of pure evil in the pursuit of an ill-defined working-class utopia.

In the first section, “The Duties of the Revolutionary Toward Himself,” Nechayev explains what it means to be a real revolutionary:

“The revolutionary is a doomed man. He has no personal interests, no business affairs, no emotions, no attachments, no property, and no name. Everything in him is wholly absorbed in the single thought and the single passion for revolution.

“The revolutionary knows that in the very depths of his being, not only in words but also in deeds, he has broken all the bonds which tie him to the social order and the civilized world with all its laws, moralities, and customs, and with all its generally accepted conventions. He is their implacable enemy, and if he continues to live with them it is only in order to destroy them more speedily.

“The revolutionary despises all doctrines and refuses to accept the mundane sciences, leaving them for future generations. He knows only one science: the science of destruction. For this reason, but only for this reason, he will study mechanics, physics, chemistry, and perhaps medicine. But all day and all night, he studies the vital science of human beings, their characteristics and circumstances, and all the phenomena of the present social order. The object is perpetually the same: the surest and quickest way of destroying the whole filthy order.

“The revolutionary is a dedicated man, merciless toward the State and toward the educated classes; and he can expect no mercy from them. Between him and them there exists, declared or concealed, a relentless and irreconcilable war to the death. He must accustom himself to torture.

“Tyrannical toward himself, he must be tyrannical toward others. All the gentle and enervating sentiments of kinship, love, friendship, gratitude, and even honor, must be suppressed in him and give place to the cold and single-minded passion for revolution.

“For him, there exists only one pleasure, one consolation, one reward, one satisfaction—the success of the revolution. Night and day he must have but one thought, one aim—merciless destruction. Striving cold-bloodedly and indefatigably toward this end, he must be prepared to destroy himself and to destroy with his own hands everything that stands in the path of the revolution.”

According to Nechayev, the true revolutionary must be as hard on his comrades as he is on himself:

“The revolutionary can have no friendship or attachment, except for those who have proved by their actions that they, like him, are dedicated to revolution. The degree of friendship, devotion, and obligation toward such a comrade is determined solely by the degree of his usefulness to the cause of total revolutionary destruction.”

Nachayev is totally ruthless in his pursuit of revolution and shows no mercy to anything or anyone standing in the way:

“The revolutionary enters the world of the State, of the privileged classes, of the so-called civilization, and he lives in this world only for the purpose of bringing about its speedy and total destruction. He is not a revolutionary if he has any sympathy for this world. He should not hesitate to destroy any position, any place, or any man in this world. He must hate everyone and everything in it with an equal hatred. All the worse for him if he has any relations with parents, friends, or lovers; he is no longer a revolutionary if he is swayed by these relationships.”

He holds that every leading institution of society must be penetrated by the revolutionaries. Business, religion, academia, the arts, and the military must all be twisted to serve the revolution:

“Aiming at implacable revolution, the revolutionary may and frequently must live within society while pretending to be completely different from what he really is, for he must penetrate everywhere, into all the higher and middle-classes, into the houses of commerce, the churches, and the palaces of the aristocracy, and into the worlds of the bureaucracy and literature and the military, and also into the Third Division [secret police] and the Winter Palace of the Czar.”

And no mercy must be shown to counter-revolutionaries. Those not immediately murdered must be exploited to the hilt:

“This filthy social order can be split up into several categories. The first category comprises those who must be condemned to death without delay. Comrades should compile a list of those to be condemned according to the relative gravity of their crimes; and the executions should be carried out according to the prepared order. …

“The second group comprises those who will be spared for the time being in order that, by a series of monstrous acts, they may drive the people into inevitable revolt.

“The third category consists of a great many brutes in high positions, distinguished neither by their cleverness nor their energy, while enjoying riches, influence, power, and high positions by virtue of their rank. These must be exploited in every possible way; they must be implicated and embroiled in our affairs, their dirty secrets must be ferreted out, and they must be transformed into slaves. Their power, influence, and connections, their wealth and their energy, will form an inexhaustible treasure and a precious help in all our undertakings.”

Nechayev’s tiny revolutionary “Society” had only one goal: the “happiness” of the working masses. So much did they prize that elusive state of bliss, they were prepared to make the masses completely miserable to achieve it:

“The Society has no aim other than the complete liberation and happiness of the masses—i.e., of the people who live by manual labor. Convinced that their emancipation and the achievement of this happiness can only come about as a result of an all-destroying popular revolt, the Society will use all its resources and energy toward increasing and intensifying the evils and miseries of the people until at last their patience is exhausted and they are driven to a general uprising.”

So evil was Nachayev considered that the great Russian novelist and psychological observer Fyodor Dostoyevsky modeled a main character—Pyotr Verkhovensky in his novel “Demons”—after Nachayev. Dostoyevsky, briefly a youthful revolutionary himself, was fascinated by the problem of human evil and used his masterpiece to describe the psychological and moral degradation of a small band of student revolutionaries under the influence of the psychotic Verkhovensky. Such is the power of Verkhovensky’s malevolent influence that the entire surrounding city descends into chaos.

After moving through the revolutionary circles of Europe, Nechayev was finally arrested in Zurich in August 1872 and returned to Russia to face murder charges. Sentenced to 20 years of hard labor, Nechayev carried on revolutionary activities from his jail cell with the help of guards.

For all the evils he practiced and preached, Nechayev could claim one virtue: His deeds always matched his words. Nechayev died at age 35 from edema and scurvy on Dec. 3, 1882, in Cell No. 1 of the Alexis Ravelin prison of the Peter and Paul Fortress.

When revolutionaries from the notorious, radical organization Narodnaya Volya (People’s Will) hatched a plot to spring Nechayev from prison, he refused their help. Nechayev feared his escape would distract his comrades from their plans to assassinate Czar Alexander II, which Nechayev regarded as of much more revolutionary significance than saving his own skin.

Nechayev’s supporters murdered the czar on a St. Petersburg street in March 1881. Nechayev lived another 19 months in jail. He likely had no regrets. The revolutionary’s life is nothing. Only the revolution matters.

In Nechayev’s own words from “Catechism of a Revolutionary”:

“When a comrade is in danger and the question arises whether he should be saved or not saved, the decision must not be arrived at on the basis of sentiment, but solely in the interests of the revolutionary cause. Therefore, it is necessary to weigh carefully the usefulness of the comrade against the expenditure of revolutionary forces necessary to save him, and the decision must be made accordingly.”

Sergey Gennadiyevich Nechayev never held state power like Fidel Castro, Leonid Khrushchev, or Erich Honecker. He was never a terrorist leader like Yasser Arafat, Carlos the Jackal, or Nelson Mandela. He never murdered millions like Joseph Stalin, Mao Zedong, or Pol Pot. It appears that Nechayev only ever killed one man.

While Karl Marx laid out the theoretical basis of communism, Nechayev laid out the method for achieving and maintaining it: infiltration and terror.