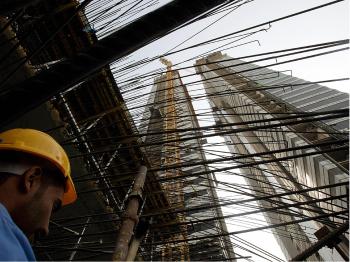 Report: Builders to Focus on Quality, Not Quantity

Christine Lin
Christine Lin is an arts reporter for the Epoch Times. She can be found lurking in museum galleries and poking around in artists' studios when not at her desk writing.
View profile
Follow
biggersmaller
Print
A Marcus & Millichap report predicts that as the capital pinch forces developers and builders to make do, the quality of office and retail units will take precedence over quantity of units. Meanwhile, business owners are downsizing both their workforces and their work spaces.

In response to more unleased commercial units, "construction will drop in 2009, slipping from 130 million square feet in 2008 to 90 million square feet," predicts the report's authors. And because lenders are exercising caution, it is likely that they will chose to finance quality projects that they believe will sell.

South of Chambers St. in Manhattan, the soaring median income of $165,000 has bumped up retail prices to more $100 per square feet over the past few years, according to Marcus & Millichap. It is also expected that the rezoning of Jamaica and Willets Point will bring more retail activity to Queens. Continued vacancies will force prices down for lessees, possibly fostering more retail growth.

Residential units are similarly experiencing higher vacancy rates, though not nearly as high on a percentage basis as commercial units. M & M's 2009 report on market-rate apartments predicted that vacancies will rise to record highs.

In 2008, the vacancy rate rose to 3.4 percent. The 2009 vacancy rate is expected to reach 4.7 percent, the highest in 28 years. The residential market, however, faces a larger scale dilemma that the commercial market does not: many apartments were built just in time to face a dwindling pool of renters.

Few new commercial buildings were completed in the past few years.

"Despite no new construction scheduled for completion in 2009, two properties were completed in 2008. Bank of America began to move employees into 1 Bryant Park, a 2.1 million-square-foot building," wrote researchers at Grubb & Ellis, a commercial real estate services and investment company. "In addition, 510 Madison Avenue, a 330, 000-square-foot building was completed in 2008. The building was originally built for the growing hedge fund market, but in 2008 this industry began to feel the effects of the financial crisis."

Though experts agree that 2009 will be another slow year in commercial real estate, Marcus & Millichap researchers expect the job market to begin stabilizing "as early as the second half of [this] year," propelling the housing market upward again.