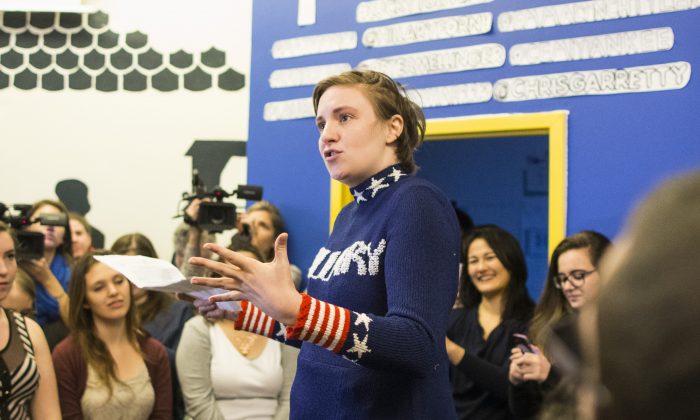 Lena Dunham, an actress and supporter of Hillary Clinton, says that the media have been unfairly portraying Clinton and proposed a list of words that no one can use to describe the main female presidential candidate.

Dunham, who stumped for Clinton in New Hampshire and Iowa, said in an interview published Sunday that the media is “rabidly sexist” in its portrayal of Clinton.

“The way that Hillary Clinton has been talked about in the media is so gendered and rabidly sexist in every single portrayal,” Dunham told Variety. “The adjectives, whether it’s attacks on her personal life or the adjectives that are used to describe her clothing, we have to do a full re-examination.”

She then outlined the words she believes reporters should not use when describing female candidates.

“Like, I literally want to make a list that we hand to media outlets that says these are the words you can’t use when you’re describing a female candidate: shrill, inaccessible, difficult, frumpy, plastic,” the “Girls” star proclaimed.

“I mean, there’s just a list of words that if we were allowed to talk about male candidates like that, I’d have a [expletive] field day. I’d enjoy my life so much.”

Dunham has been a big supporter of Clinton, appearing at multiple campaign events.

But the New York Times claimed that Dunham expressed conflicting feelings about Clinton just a few months ago at an Upper East Side dinner party.

“She told the guests at the Park Avenue apartment of Richard Plepler, the chief executive of HBO, that she was disturbed by how, in the 1990s, the Clintons and their allies discredited women who said they had had sexual encounters with or been sexually assaulted by former President Bill Clinton,” the media outlet reported, citing anonymous sources.