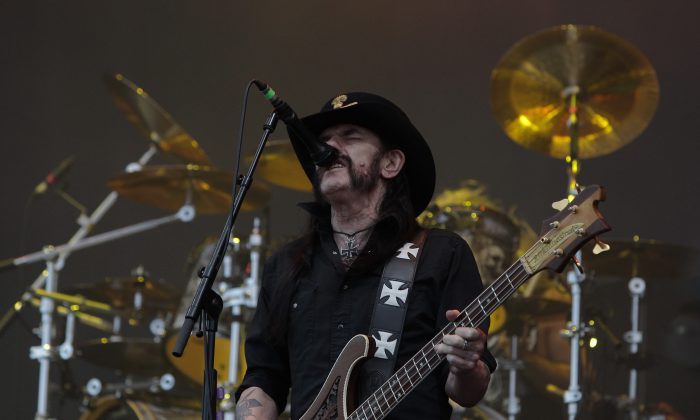 Lemmy Kilmister, the longtime singer and bassist for metal band Motörhead, has died of cancer, the band has confirmed on Monday evening.

Motörhead said Lemmy was diagnosed with the cancer just two days ago.

There is no easy way to say this…our mighty, noble friend Lemmy passed away today after a short battle with an extremely…

Radio and TV host Eddie Trunk, who was a longtime friend of Lemmy, first broke the story of his death. “Sorry to report that I have confirmed Lemmy @myMotorhead has passed away just now at the age of 70. RIP to a true original icon of rock,” Trunk tweeted.

Later, Motörhead confirmed his death on Facebook, and it read:

“There is no easy way to say this… our mighty, noble friend Lemmy passed away today after a short battle with an extremely aggressive cancer. He had learnt of the disease on December 26th, and was at home, sitting in front of his favorite video game from the Rainbow which had recently made it’s way down the street, with his family. We cannot begin to express our shock and sadness, there aren’t words. We will say more in the coming days, but for now, please… play Motörhead loud.”

Lemmy, who was born Ian Fraser Klimisterin in Burslem, United Kingdom, had been battling a range of health issues over the years.

“Lost one of my best friends, Lemmy, today. He will be sadly missed. He was a warrior and a legend. I will see you on the other side,” fellow British rocker Ozzy Osbourne tweeted.

Sorry to report that I have confirmed Lemmy @myMotorhead has passed away just now at the age of 70. RIP to a true original icon of rock.

My heart is broken. @iamlemmy is gone. He changed my life. He made my life. I loved him.

Lemmy RIP….@myMotorhead my condolences to his family..

Motörhead have yet to confirm his death. Trunk said an official statement is pending.

Lemmy is famed for having lived a hard life, claiming to have consumed a bottle of Jack Daniel’s every day since he turned 30 and was also apparently fond of amphetamines. He joked recently that he had switched from drinking whiskey to vodka for “health reasons,” according to an interview. “I am still indestructible,” he said in August.

The band said it had to cancel a few recent performances because of what the band said was a lung infection.