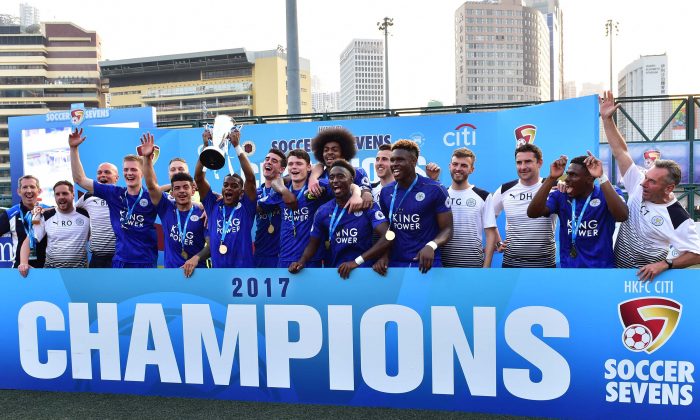 Leicester City celebrate winning the HKFC Citi Soccer Sevens Main Tournament at the Hong Kong Football Club on Sunday May 28, 2017. They beat Aston Villa 3-0 in the final to claim their second success in the tournament adding to their win in 2013. (Bill Cox/Epoch Times}
HK Football

HONG KONG—Leicester City put on a scintillating display in the HKFC Citi Soccer Sevens tournament winning all of their Pool matches, then taking out West Ham 3-1 in the quarter final, Glasgow Rangers 3-1 in the semi-final and Aston Villa 3-0 in the final, adding to their 2013 win.

Defending Champions Aston Villa also had a good tournament with just one draw (2-2) in the Pool stage against an impressive HKFA U23 team that harried their opponents with fast determined play. Villa needed to beat Bayer Leverkusen in their final Pool encounter and Jordan Cox and Harry McKirdy produced the goals to take them to the knock out stage.  Villa beat Cagliari Calcio in the quarters and Olympique Marseille 4-0 to progress to the final.

The final line up looked the perfect match with leading goal scorers on both sides: McKirdy with seven goals and Josh Eppiah of Leicester one behind on six. Villa had taken apart lesser opponents with their one-two across goal strategy to plant goals in the net, but in the final Leicester defenders were well up to the task, nullifying the risk and scoring impressive goals at the other end. Leicester were dominant in the final, well in command in all aspects of the game, Eppiah scored two goals and Joshou Gordon contributed in their 3-0 win. Eppiah finished with 8 goals to become the highest scorer and was also named Most Valuable Player.

“I’m over the moon and proud of myself. I took my chances well but the team and the staff around me have helped,” said Eppiah, who also scored twice in the 3-1 quarter-final win over West Ham United and once in the semi-final victory against Glasgow Rangers.

“This whole tournament has been amazing and I’d love to come back next year because I’m still a youngster and have more years to come back and do the same as I did today.

“The boys fought, held on, came back, and in the final we were all up for it so we came out and gave it everything we have.”

West Ham beat Cagliari Calcio 2-0 in the Main Shield final and newcomers to the tournament, Bayer Leverkusen won the Main Plate against Wellington Phoenix 2-1. Bayer looked a class side in many of their matches.

There was much interest in the Masters tournament with well-known names in several of the teams. Citi All Star retained the Masters trophy beating Wallsend Boys Club in a tough 3-2 victory in the final.  Citi All Stars ex Norwich City striker Jamie Cureton scored the deciding goal and topped the scorer list with nine goals and was named Most Valuable Player.


The event was kickstarted on Friday evening with U14 and U16 exhibition matches. The appearance of the famous Brazilian footballer Ronaldo Nazario, the Real Madrid Ambassador for the Dreams Foundation attracted many youngsters as well as adults from the HKFC Crusader programme. Ronaldo showed some of his skills in playing with selected youngsters before signing autographs for the children.

Long term volunteer coach Jamie of the Crusader programme explained that the programme was started some 15 years ago to help adults with learning difficulties from across Hong Kong to improve their skills and capabilities.

The Breakthrough Soccer programme has over 120 young boys and girls participating every week in the coaching programme, and over 100 attended this year’s Soccer Sevens.

The tournament itself has been extended to include more teams from top European clubs and Tournament Director Chris Plowman called it “the most diverse and inclusive of it’s kind”.