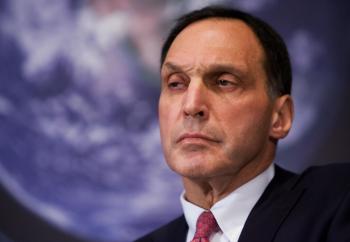 Lehman Brothers Chairman and CEO Richard Fuld is looking for potential investors to take a stake in his company. The investment bank’s stock has dropped over 75 percent since Jan. 1. (Mandel Ngan/AFP/Getty Images)
Business

Lehman Brothers At The Crossroads

Lehman Brothers At The Crossroads

NEW YORK—On the thirty-first floor of the Lehman Brothers headquarters in Manhattan, Chief Executive Officer Dick Fuld must be tired of the incessant rumors about his firm’s demise. The 39-year Lehman veteran has presided over tough economic times, but none where the bright target rests squarely on his—and his firm’s—back.

With Lehman possibly headed for another quarterly loss, Fuld is having difficulty finding new investors and raising capital, though its recent stock performance may have something to do with it.

What has taken Lehman so long to find a suitor?

“Because management's perception of the company's value is meaningfully different than the investors' perception,” According to Barron’s analyst Ladenburg Thalmann in a recent report. “Investors are convinced that that this company cannot survive or that it will be forced into taking huge losses that will devastate book value.”

Lehman management apparently has different views on the value of the company. It could try to sell its most valuable piece, asset manager Neuberger Berman, valued somewhere between $8 billion and $13 billion by analysts.

But the numbers don’t quite add up. As of Friday’s close, Lehman’s market capitalization stands at around $10.76 billion, and if Neuberger is truly worth between $8 and $13 billion, that puts the value of the rest of the firm—its investment banking, equities, and fixed income operations—at close to or below zero. And that’s not the value a Lehman lifer like Fuld can accept.

Some think that it may be wise for the company to keep its most valuable assets, such as Neuberger and its 20 percent stake in hedge fund D.E. Shaw. With the tough credit market and the company’s $40 billion position in commercial real estate-related securities, it may need the earnings generated from the funds.

Analysts expect Lehman to take another write down in the third quarter. JPMorgan & Chase analyst Kenneth Worthington believes the write down could be as high as $4 billion, due to its exposure to mortgage and other asset-backed securities.

“Its outsized residential and commercial mortgage positions continue to require markdowns, and the hedges that had been so efficient in offsetting some of those losses have not held up,” S&P analyst Matthew Albrecht wrote in a recent research report.

The current standoff, however, could be good news for investors. Time is ripe for a bidder to swoop in and purchase the company outright, according to Thalmann, who upgraded Lehman’s stock to a “buy” rating.

“The stage is set for a hostile bid to take over the whole company,” he said.