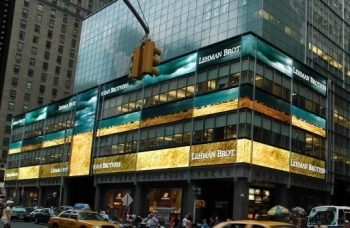 By Antonio Perez
biggersmaller
Print
NEW YORK—Lehman Brothers, the battered investment bank whose stock has declined almost 95 percent this year, is in the process of filing for bankruptcy, sources say. Its lifeline was unplugged after Bank of America pulled out of negotiations hours after Barclays backed out of a potential deal.

Barclays, U.K.’s third-largest bank, emerged on Sunday as a possible contender only to back out moments later, citing an inability to obtain federal or private funding to guarantee portions of Lehman’s potential trading losses.

Barclays and Bank of America were the closest to coming to terms with Lehman.

After Bank of America withdrew from talks, it announced that it would purchase Merrill Lynch for $29 per share, a 70 percent premium over its Friday closing price of $17.05. Merrill is one of the largest brokerages in the world and has a profitable asset management business.

Merrill shares fell around 35 percent last week as the financial services industry weathered one of its worst weeks in recent history.

With the federal government unwilling to pony up additional taxpayer money to bail out Wall Street firms, liquidation seemed to be the most logical step for Lehman, the fourth-largest investment bank in the United States.

Reports indicate that Lehman will place its parent company, Lehman Brothers Holdings Inc., under bankruptcy protection while its business divisions work to unwind its positions and liquidate its assets.

As Lehman is a financial services company, it cannot restructure and continue its operations under bankruptcy protection. According to federal bankruptcy code, it must liquidate and distribute its assets.

"This is an extremely, and I stress extremely, rare event. It also speaks to the more general notion that, in today's highly disrupted financial markets, the unthinkable is thinkable," said Mohamed El-Erian, the chief executive of Pimco, the world's largest bond fund, said in a Reuters report.

The International Swaps and Derivative Association, a governing body for “over the counter” derivatives, held a special session on Sunday afternoon for banks to offset their Lehman trades with one another.

The unwillingness of the Federal Reserve to finance a deal became the biggest obstacle hindering any Lehman deal. Neither Bank of America nor Barclays were comfortable with absorbing Lehman’s potential losses without government backing, such as the one the Fed provided JPMorgan Chase in its Bear Stearns takeover.

The Fed adamantly resisted such financial backing for a similar deal with Lehman early in negotiations. After the bailout of Bear and government sponsored entities Fannie Mae and Freddie Mac, the U.S. government became wary of providing another $30 billion in taxpayer dollars to finance a Lehman transaction.

Lehman now has access to the Federal Reserve discount window enacted after the Bear bailout, allowing brokers access to unlimited short term cash, which gives the bank enough time and money to unwind its operations in an orderly fashion.

Lehman’s demise comes after months of speculation driven by the near-collapse of former rival Bear Stearns & Co. in March. In the Bear transaction, the Federal Reserve guaranteed $29 billion to secure a deal with JPMorgan Chase.

Events over recent months gave federal regulators—including the Fed and the Securities and Exchange Commission—more authority over monitoring the pulse of the financial markets. According to reports, the Fed has kept onsite staff at the top brokerages and investment banks since the Bear rescue.

Back in March, analysts cited Lehman’s much stronger balance sheet, compared to Bear’s, as deterrent against a collapse. However, the U.S. credit market has taken a turn for the worse since the Bear rescue.

After Lehman announced that it had lost nearly $4 billion in the latest quarter, investors punished its stock in last week’s trading. Lehman CEO Dick Fuld’s announced attempt to sell off a portion of its mortgage securities offered little assurance to worried investors. Its stock began the week above $15 and ended trading on Friday at $3.59.