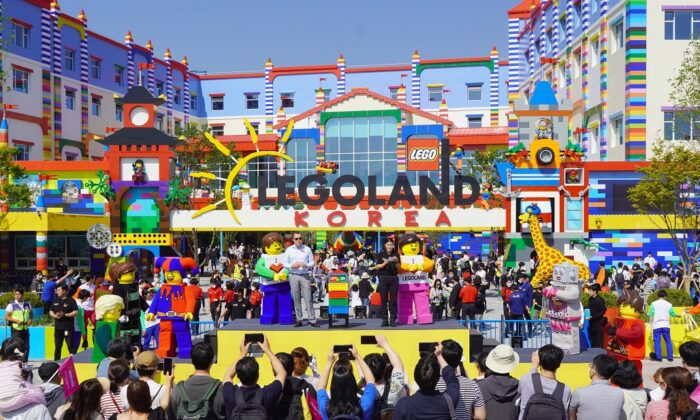 Legoland Korea Opens on Children’s Day After Years of Delays

Legoland Korea Resort opened to the public on May 5, Children’s Day, after 11 years of delays following the discovery of historical artifacts near the site.

The new theme park is the first Legoland built in the northern town of Chuncheon, Gangwon province, and is Merlin Entertainments’ third Legoland in Asia, following resorts in Japan and Malaysia.

Tickets sold out ahead of the resort’s official debut, which features over 40 interactive rides, and a total of 12,000 visitors were permitted entry, The Korea Herald reported.

“Legoland Korea is a place for children and their families. The opening is all the more meaningful because it’s Children’s Day. We believe this will be the theme park for anyone seeking a real Lego experience,” Phil Royle, Legoland’s divisional director, said in a statement.

Merlin Entertainments, the world’s second-largest operator of visitor attractions behind Walt Disney, signed a deal with Gangwon province to open Legoland Korea in 2011.

In November 2014, Merlin said the company would invest roughly one-third of the total 172 million pounds ($212 million), with the rest coming from a property company funded by local investors.

According to local reports, the park’s launch faced numerous delays due to a lack of funding from local investors and a controversy over the discovery of historical artifacts near the construction site.

A civic group comprised of Chuncheon residents held a press conference ahead of the theme park’s opening, accusing Merlin and its developer Gangwon Jungdo Developments Corp. (GJC) of violating the terms of the site’s conditional permits.

They claimed that Legoland was allowed to proceed with construction between 2014 and 2017 after GJC agreed to build a separate park and exhibition hall to preserve the artifacts, The Korea Herald reported.

“The Legoland operation permit is now invalid as it has completely failed to meet the terms of the conditional use permit,” the civic group said Monday. The group also condemned the Cultural Heritage Administration for neglecting the artifacts.

Oh Dong-chul, chair of Chuncheon Civil Society Network, said that “nothing has changed” regarding the storage of the artifacts, despite the 2017 settlement requiring the park and exhibition hall to be ready on opening day. The report notes that the artifacts were covered in black plastic and kept in greenhouses.

“Our groups have participated in multiple hunger strikes, including one in 2019. Over 150 billion won ($118 million) have been poured into the theme park. There is no reason to delay the establishment of the preservation park that had been planned since the early stage of Legoland construction,” Oh said.

Merlin Entertainments told The Epoch Times on May 9 that it has “worked closely with the CHA [Cultural Heritage Administration] throughout the project,” taking “multiple steps” from early planning through to construction to preserve the artifacts.

“This includes altering the planned location of parts of the site. The CHA oversaw the excavation work, and important artifacts have been carefully stored for our future public display in the dedicated museum on the island,” it said in an email.

“The team at Legoland Korea is committed to ensuring that all visitors are able to learn about the island’s heritage, with the backing of the Gangwon Province government and the Korean Central government,” it added.