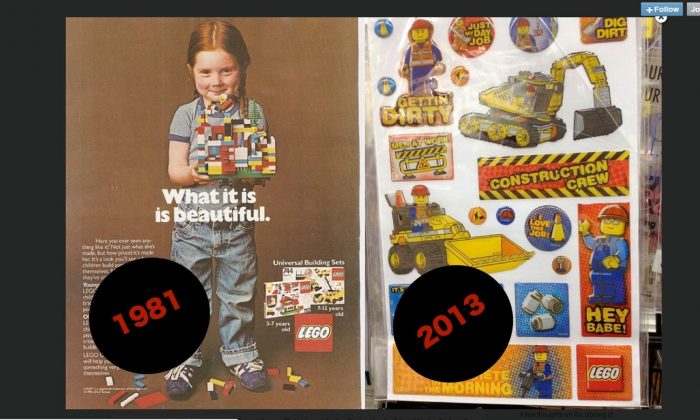 A screenshot shows Josh Stearns' Tumblr account with the Lego sticker in question.
US

The father of two boys said Lego sent an apology to him over the sticker, which featured a construction worker waving and apparently shouting to a woman, reported ABC News.

Josh Stearns, the father, posted one of the Lego stickers to his Tumblr account, claiming the sticker promotes sexual harassment.

“I was so disappointed to see the brand affiliated with a product that normalized street harassment and cat calling,” Stearns said. “Needless to say, I didn’t buy the stickers,” Stearns continued.

While he said he was disappointed with Lego, Stearns said he “was more disappointed by some of the responses my post sparked.”

“A number of men took to my Facebook page to defend the sticker asking if ‘Hey Babe’ really amounted to harassment and warning the ‘well-intentioned anti-harassment camp’ that their outrage could alienate ‘non-extreme feminists,’” he said on his Tumblr account.

Stearns added that he never wanted to cause a problem over the stickers but stressed the issued should have been raised.

“If we don’t call out these things when we see them, then even the little pieces of culture, like a pack of stickers, can serve to normalize sexist behavior and harassment,” he wrote.

A Lego official, Andrea Ryder, communicated with Stearns in saying the sticker was no longer available.

“I am truly sorry that you had a negative experience with one of our products,” she wrote, according to ABC News.