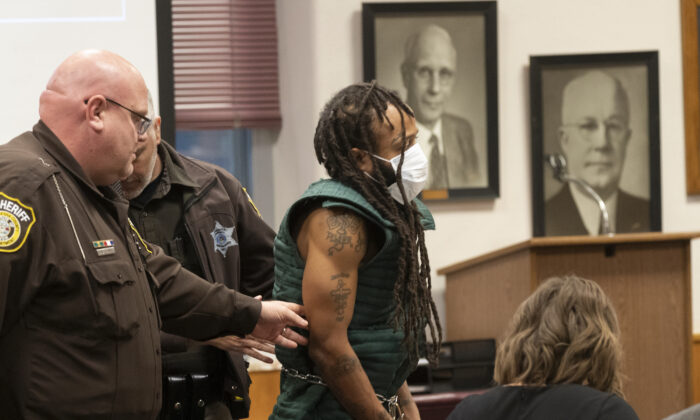 A group of Republican Wisconsin lawmakers is turning up the heat on Milwaukee County District Attorney John Chisholm, whose lenient bail policies—they say—put a career criminal back on the street, allowing him to allegedly plow his vehicle into the Waukesha Christmas Parade, on Nov. 21, killing six people and injuring 61.

Sixteen lawmakers who represent Waukesha County in the Wisconsin Legislature—including Senate President Chris Kapenga—sent a letter to Gov. Tony Evers, a Democrat, asking him to remove Chisholm from office.

“We hope this tragedy never happens to another Wisconsin community, because it never should have happened in Waukesha,” read the letter, which has not generated a response from Gov. Evers.

Police said Brooks zig-zagged his vehicle as he sped down the parade route, leaving injured and dying victims in his wake. No motive has been given.

Brooks was charged with six counts of first-degree intentional homicide and is being held in lieu of $5 million bail.

He is due in court for a preliminary hearing on Jan. 14.

Killed in the attack were members, and a volunteer, from the Milwaukee Dancing Grannies group, a bank employee, and an 8-year-old boy.

Brooks had been in Milwaukee jail and was released two days before the Christmas parade on $1,000 bail, an amount Chisholm later said was “inappropriately low” considering Brooks was charged with punching the mother of his child in the face and running her over with the same SUV allegedly used in Waukesha. Police said she had tire marks on her leg.

On Dec. 7, Milwaukee County prosecutors charged Brooks with three more felonies in the Nov. 2 attack, including intimidating a victim, intimidating a witness, and bail jumping.

Authorities allege Brooks tried to dissuade the victim from cooperating in the case.

Brooks had another open felony case at the time of the parade attack. He was charged in July 2020 with two counts of second-degree recklessly endangering safety with a weapon and possession of a firearm by a felon.

The criminal complaint says after a dispute with his nephew over a cell phone, Brooks fired a pistol into a vehicle in which the nephew and a companion were seated.

Due to a 350-case backlog, Milwaukee County was not able to meet Brooks’ demand for a speedy trial, so he was released in early 2021 on $500 cash bail. Brooks has a criminal record that stretches over two decades.

Chisholm has said his office is conducting an internal investigation of the bail in the Nov. 2 case.

The Milwaukee County court commissioner who set the $1,000 bail, Cedric Cornwall, was reassigned from criminal court and will now handle non-criminal cases.

Chisholm blamed an inexperienced assistant district attorney for requesting the low bail, but the Republican lawmakers say the blame lies with Chisholm, a Democrat first elected in 2007.

The Epoch Times contacted Chisholm’s office for comment, but has not yet received a response.

“Chisholm has refused to step down after a flood of calls for his resignation,” the letter to Gov. Evers read. “Because of this, we are calling on you to remove John Chisholm as Milwaukee County district attorney.

“It is clear to us as legislators—and many people from the Waukesha County and Milwaukee County areas affected by the recent tragedy—that District Attorney Chisholm has neglected his duty in his office.”

Evers said he cannot take action without a certified complaint from a Milwaukee County resident. He earlier told reporters Brooks “should not have been out on bail.”

He told Milwaukee’s Fox 6 television: “We have a process, simple: I get a letter from somebody in the county, requesting that process be initiated, and we’ll initiate it.”

Fox 6 reported Chisholm rebuffed the idea of stepping down, quoting him saying: “When things get tough, when tough things occur, the response shouldn’t be to quit, to run away from the problem.”

The Waukesha County lawmakers pointed to Chisholm’s “haunting” words to the Milwaukee Journal Sentinel in 2007: “Is there going to be an individual I divert, or I put into (a) treatment program, who’s going to go out and kill somebody? You bet. Guaranteed. It’s guaranteed to happen.”

Chisholm was most recently on the ballot in November 2020, when he won a new four-year term with nearly 98 percent of the vote.

“Under his leadership, Chisholm has fulfilled his own prophecy—and innocent Wisconsinites have now paid and will continue to pay the price for his actions,” the letter to Evers said.

The Epoch Times asked Evers’ office for comment, but has not yet received a reply.

Part of a Pattern

Low bail in felony criminal cases—and the decision not to prosecute the majority of cases referred by police—are hallmarks of Chisholm’s tenure, according to an investigation by the news site Wisconsin Right Now.

“Last year, there was a ‘no process’ rate of about 60 percent for felonies and about 65 percent for misdemeanors, an overall increase of about 10 percent fewer cases charged over 2019,” read the investigation, published in April 2021.

“The trends for 2021, including for violent crime and gun non-prosecutions, are getting even worse,” the investigation found. “In fact, when it comes to guns, police are referring more firearms cases, but the DA is charging fewer of them. Police referrals of violent crimes are down, but the DA’s no process decisions are rising more.”

Brooks is not the only Milwaukee-area case involving a person, out on bail, who allegedly committed a violent crime in November 2021.

At the time, Marcinkiewicz was out on $5,500 bail in a stabbing case from August 2021, court records show.

The morning of the homicide, Marcinkiewicz was in court for a preliminary hearing in the August stabbing, but the case was adjourned until Dec. 22. He is being held at the Milwaukee County Jail in lieu of $250,000 bail.

Four days after the Waukesha parade massacre, police allege 20-year-old Donta L. Roberts of Milwaukee shot and killed another man while out on a $500 signature bond from a 2020 case.

Roberts is charged with first-degree reckless homicide. In the earlier incident, Roberts was accused of pointing a firearm at someone in the summer of 2020.

According to the Milwaukee Police Department’s crime-statistics database, the city recorded 186 homicides through Dec. 12, level with last year’s rate, but 92 percent higher than the full year of 2019.

In 2016, Milwaukee County became part of the Safety and Justice Challenge sponsored by the John and Catherine MacArthur Foundation.

The program is “reimagining and rebuilding local criminal justice systems—reducing jail incarceration and increasing equity for all,” according to its website.

Since 2015, the number of Milwaukee County cases with jail sentences fell 78 percent, to 596, according to the district attorney’s data dashboard.

The district attorney’s office received 5,031 violent-felony case referrals through Sept. 30, 2021, an 11-percent increase from the same period in 2020.