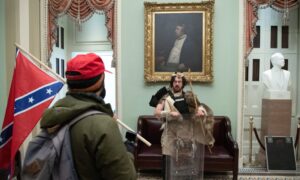 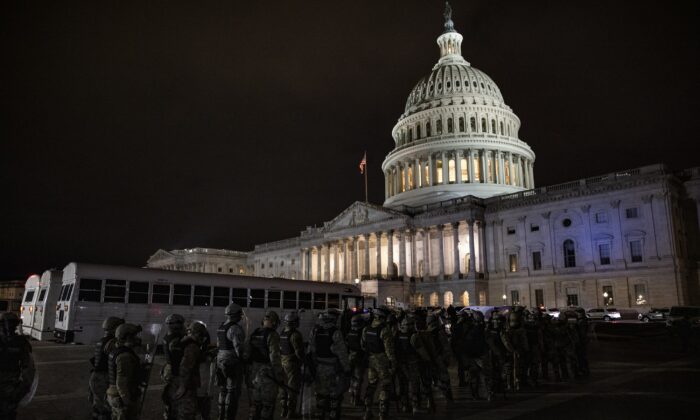 The U.S. Capitol is seen with law enforcement officers outside in Washington on Jan. 6, 2021. (Samuel Corum/Getty Images)
US News

The U.S. Capitol Police officer who was seen leading protesters who had stormed the building on Jan. 6 away from lawmakers deserves a Congressional Gold Medal, according to a measure introduced on Jan. 14.

Crist called Goodman “a hero,” saying he “was the only thing standing between the mob and the United States Senate.” Cleaver said if not for the officer’s actions, “the tragedy of last week’s insurrection could have multiplied in magnitude to levels never before seen in American history.”

“The actions of Officer Goodman were heroic and represent the best of law enforcement,” Mace added. “When he was the only thing standing between Members of Congress and the violent mob, he quickly and selflessly redirected their fury upon himself so those Members could escape. Thanks to his valor, we are here today. From the bottom of my heart, I cannot thank him enough for his bravery and for his dedication to the call of duty.”

Around 2:14 p.m., Goodman confronted an angry group that had illegally entered the Capitol, according to the bill (pdf). Goodman delayed the group’s advance toward the Senate by noticing the chamber’s entrance was unguarded, and intentionally diverted attention away from the entrance and to additional officers.

“By putting his own life on the line and successfully, single-handedly leading insurrectionists away from the floor of the Senate Chamber, Officer Eugene Goodman performed his duty to protect the Congress with distinction, and by his actions, Officer Goodman left an indelible mark on American history,” the bill states.

Five people died during and after the Capitol breach, including protester Ashli Babbitt, who was shot dead by a U.S. Capitol Police officer, and USCP officer Brian Sicknick, who died the following day from injuries suffered while responding to the breach. Three others died due to medical reasons.

The Congressional Gold Medal is the highest expression of national appreciation for distinguished achievements and contributions from Congress. The first recipients included citizens who participated in the American Revolution, the War of 1812, and the Mexican War.

To bestow the medal, at least two-thirds of the members of the House and at least 67 senators must cosponsor legislation.