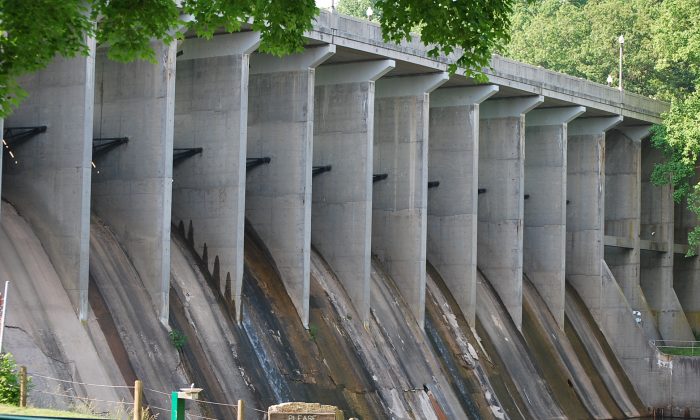 The Brighton Dam in Montgomery County, one of the bridges and dams in Maryland that requires regular maintainance. (Ron Dory/ Epoch Times)
US

Bridge collapse inspires bill to invest in bridges, roads, and other infrastructure
By Ron Dory

WASHINGTON—In the wake of the May 23 bridge collapse in Washington state, Rep. John Delany (D-Md.) introduced the Partnership to Build America Act to rebuild the country’s transportation, energy, water, and education infrastructure, without raising taxes.

The bill proposes to create the American Infrastructure Fund. The fund would provide loans to state and local governments to fund qualified infrastructure projects.

“We can’t compete in the global economy of the 21st century without a significant investment in our infrastructure. At no cost to the taxpayer, this legislation will finance a massive investment in U.S. infrastructure, get Americans back to work now, and position our businesses to grow for decades to come,” stated Delaney in a press release.

“This fund will be capitalized by the sale of 50-year bonds that are not guaranteed by the Federal government and pay 1 percent interest rate,” stated Congressman Jared Polis (D-Colo.) in a press release. “To encourage U.S. corporations to purchase these bonds, they will be allowed to repatriate a certain dollar amount—determined by auction—in overseas earnings tax-free for every $1 they invest in the bonds.

“We need to come up with a proactive plan to assess the state of our current infrastructure,” said Richard Grant, co-owner of Russell Corrosion Consultants.

Grant says that in addition to offering funding for maintenance, federal and state governments and municipalities need to take stock of their infrastructure assets, and monitor and assesses them to prevent failures.

“This project delivers on a promise to the citizens of Prince George’s County and will enhance the safety of motorists traveling to and from Joint Base Andrews, as well as the County Seat in Upper Marlboro,” stated Gov. Martin O’Malley in a Maryland Department of Transportation press release. “This $18 million project is an investment in safety and quality of life, and furthers our efforts to build a transportation system that will meet the needs of future generations.”