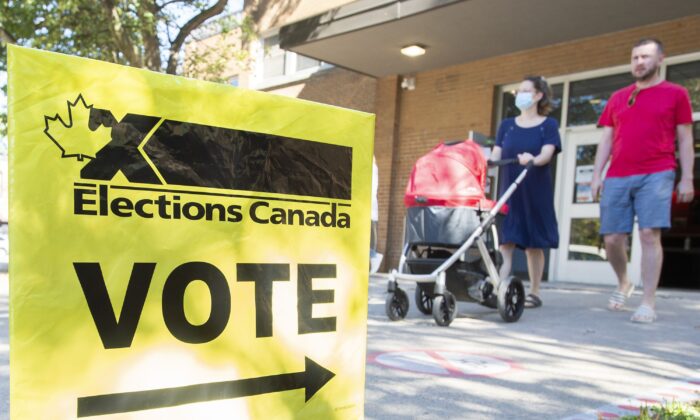 People leave a polling station after voting on federal election day in Montreal on Sept. 20, 2021. (The Canadian Press/Graham Hughes)
Canada

Legislation to Lower Voting Age Aims to Improve Democracy, but Skeptics Have Concerns

Private member’s bills in the House and Senate are seeking to lower Canada’s voting age to 16, a move supporters say could lead to higher democratic participation over a lifetime. But critics say it would have a marginal impact at best in elections and question whether 16- to 18-year-olds have enough skin in the game at that age.

Bill S-201, introduced by non-affiliated Sen. Marilou McPhedran of Manitoba, and Bill C-210, introduced by NDP MP Taylor Bachrach of Skeena-Bulkley Valley, B.C., aim to lower Canada’s voting age for the first time since 1970, when it dropped from 21 to 18.

McPhedran, a former lawyer and professor,  told The Epoch Times she came to the Senate in 2016 focused on “youth engagement” and “a high level of concern about the state of democracy.” She said early consultation following her appointment, especially with Francophone youth, convinced her that lowering the voting age was part of the solution.

“[If we] ask ourselves what are the ways in which we can increase engagement and voter turnout in our democracy, lowering the federal voting age to 16 is a key component,” she said.

McPhedran said she tries to build support for 16-year-olds to vote across the political spectrum.

“I’ve had numerous conversations with NDP and Liberal MPs, several cabinet ministers, the director of policy in the Prime Minister’s Office, [and] a number of Conservative senators and Conservative members of Parliament.”

Last December, the Justice for Children and Youth non-profit legal aid clinic and the David Asper Centre for Constitutional Rights at the University of Toronto applied to the Ontario Superior Court of Justice on behalf of 13 Canadians aged 12 to 18 to challenge the constitutionality of denying voting rights for those under 18.

“I don’t think it’s really a human rights question. We have to set it somewhere, so 18 is fine, 16 is fine. I like the idea of getting people into the system earlier so that they’re more likely to stay in it later, if that works,” Desserud said in an interview.

Common arguments against lowering the voting age are easily challenged, the professor says.

“The argument against it is that, first of all, they’re not aware of the system and the associated problems of politics to make good choices. I find that to be a somewhat dubious question, because we don’t test [older] people to see when they are aware, and I seriously doubt that most voters are at any age,” he said.

“[Others say] they’re going to vote exactly the way their parents tell them to. … That was the exact same argument they used to use against giving women the vote, because [they said] married women would simply be told what to do by their husbands. It was a bad argument then and it’s a bad argument now.”

Desserud believes the Greens and NDP would benefit most from high school voters, based on the idealism of youth and their attraction to environmental issues. While he welcomes their participation, he says their numbers are too small to tip many elections.

Malcolm Bird, political science professor at the University of Winnipeg, says that just because some young teens are politically keen doesn’t mean they should get the vote.

“I have a signed copy of Preston Manning’s ‘The New Canada,’ which I bought when I was 15 and I was very political. But I don’t remember ever being bitter that I couldn’t vote—I just thought it was like not being able to drink or drive or whatever. There are rules,” he says.

Bird says the political and general knowledge of teens and university students has worsened in recent years, and he wonders what downsides might follow the politicization of high schools. He believes that Canadian democracy functions better than most people give it credit for, and is unsure if adding younger voters will solve what problems it does have.

“The standard narrative is governments are not responsive, they’re not democratic, and people want to connect policy and what governments do better, so …  more people voting—that will solve the problem,” he said. “You’re putting a lot of weight on the back of voting and it really having a big impact on the individual, and making the individual feel a part of this larger decision-making. I’ve only ever voted for the winning candidate once my entire life.”

Austria lowered the voting age to 16 in 2007. A February 2020 study by Democratic Audit UK found that the youngest Austrian voters tended to be less interested in politics, more trusting of government, and less likely than average to vote for a party whose ideology matched their own. However, those who began voting at 16 were between 2.3 percent and 10 percent more likely to vote in future elections than those who didn’t vote for the first time until ages 18 to 20.

“The onus is on the person to explain why 16 is better than 18 as opposed to those defending the age of 18. It should be more than just partisan politics,” Bratt said.

“It’s usually more progressive parties that are convinced that if they can get young people to vote, they would be better off. And so they’re the ones that tend to drive this.”

“After all, 18-, 19-, 20-, 21-year-olds tend to have a lower rate of voter turnout than much more elderly people,” he says. “Why is 16 better than 18? The other side needs to make that case. Are they as affected as those over the age of 18 because they’re most likely still living at home?”