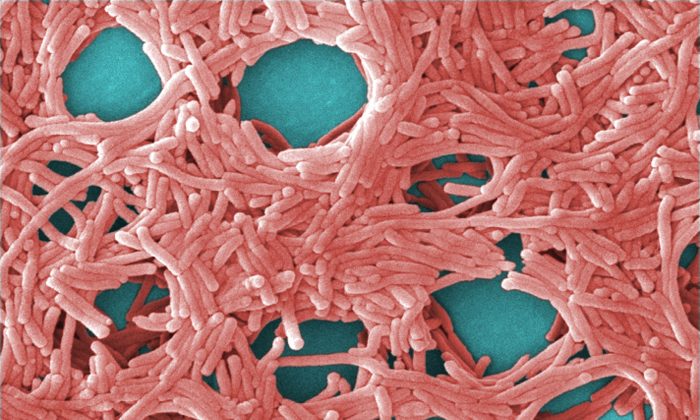 UPDATE on Aug. 3: In the Bronx, 81 people have been infected with Legionnaires’ Disease, 64 were hospitalized, 28 were treated and discharged, 7 have died.

NEW YORK—Forty-six people in the South Bronx were infected with Legionnaires’ disease as of Thursday afternoon, July 30, Mayor Bill de Blasio said at a press conference. Two have died.

The two New Yorkers who passed away with Legionnaires’ disease were both in their 50s.

Ordinarily, Legionnaires’ disease, which got its name in 1976 when an outbreak occurred during a American Legion conference in Philadelphia, is treatable if detected early. Nine of the 46 infected have been treated and discharged. Most healthy people aren’t at risk. The majority of cases have affected people in the South Bronx neighborhoods of High Bridge–Morrisania and Hunts Point–Mott Haven.

“I want to reiterate, most New Yorkers are not at risk,” Bassett said. “This is a very treatable disease.”

Two locations in the Bronx tested positive for Legionella bacteria; one was Lincoln Hospital, where the bacteria was found on the rooftop cooling system.

Decontamination is happening as we speak and it will be completed by tomorrow afternoon.
— Mayor Bill de Blasio

The tap water inside the hospital is safe and no hospital staff members have been infected, a representative from the hospital said at the press conference.

The other rooftop cooling system that tested positive was at the Concourse Plaza, which includes a movie theater.

“We are aggressively investigating and testing all possible sources,” de Blasio said.

“Decontamination is happening as we speak and it will be completed by tomorrow afternoon,” de Blasio said. “There’s no reason for alarm because this situation is being addressed.”

That may not be entirely true.

It may be concerning that Lincoln Hospital was one of the two locations that were found positive for the Legionella bacteria.

The elderly, organ transplant recipients, and those with a weak immune system are at risk for the disease.

In the United States, hospitals have had a history of misdiagnosing this disease and covering it up.

In January 2013, CBS News reported that a Veterans Affairs hospital in Pittsburgh knew that its hospital had and outbreak of Legionnaires’ disease for more than a year, but did not warn its patients. Ultimately, at least 6 patients died and 22 became ill with the disease.

Although Health Commissioner Bassett said the water supply in the Bronx was safe, it may be better to take precaution anyway.

Doctors who have dealt with Legionnaires’ disease for decades say that those with a weak immune system or who smoke should take precautions such as boiling drinking water. It is a fact the de Blasio administration left out at the press conference.

Using boiled water after it has cooled would reduce the risk to zero.
— Legionella.org

“Public health authorities downplay the significance of Legionella infections because most originate from drinking water. It is easier to target a cooling tower, and harder to discuss with the general public the implications of Legionella in the drinking water,” states the website Legionella.org, which is an advocacy organization run by doctors Victor L. Yu, M.D., and Janet E. Stout, Ph.D.

Since 1982, during their tenure at the Pittsburgh Veterans Affairs Medical Center, they have been advocating for the prevention of hospital-acquired Legionnaires’ disease.

The disease can be difficult to diagnose.

The Centers for Disease Control (CDC) estimates that 8,000 to 18,000 people are hospitalized with Legionnaires’ disease in the United States each year. However, only about 3,000 cases are reported to the CDC each year.

Since the Legionella bacteria grow and thrive in lungs, smokers and those who have lung disease are at risk for this illness.

Legionella bacteria is not transmitted from person to person. People can get sick from inhaling contaminated mists from cooling towers, showers, faucets, and whirlpool spas.

If one is at risk, one should avoid drinking tap water. Instead, one should boil the water, let it cool, and then refrigerate it for drinking.

“Using boiled water after it has cooled would reduce the risk to zero,” Legionella.org states.

Legionnaires’ disease may be hard to diagnose at first because its symptoms are similar to regular pneumonia symptoms: cough, shortness of breath, high fever, muscle aches, and headaches.

Anyone with symptoms should seek care from a physician or go to the nearest emergency room, Mayor de Blasio said.

The risk of acquiring Legionnaires’ disease from one’s home water system is low, according to research.

Those who have contracted the disease from their home water systems are usually smokers.

The use of a dishwasher, washing machine, and showers do not put people at risk of the disease.

Not the First Outbreak in NYC

“You typically see two to three clusters a year,” Health Commissioner Bassett said. There was an outbreak in Flushing and Co-op City earlier this year.

The Health Department tested 10 additional sites surrounding the affected area on Thursday and is investigating the laboratory reports to determine whether patients were infected by a common source.