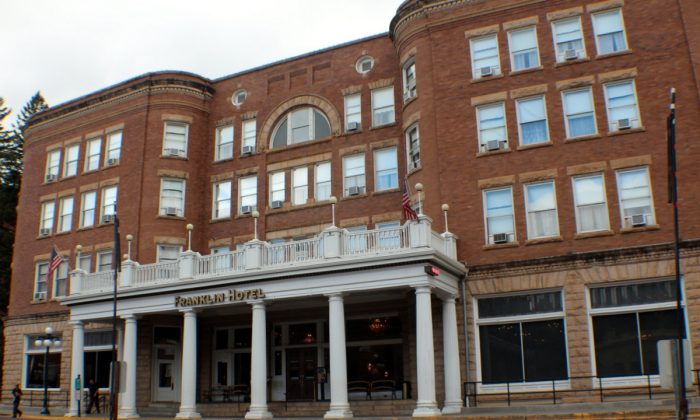 Legends Steakhouse at the Franklin Hotel

“This restaurant is about Deadwood legends,” Tom Rensch remarked. That said it all. Deadwood, South Dakota is about legends. A stroll down Main Street is like stepping back in time to an era when the 1875 gold rush brought thousands of miners to the area hoping to strike it rich. On a hill above town is Mt. Moriah Cemetery. The overlook dominates the valley below where once the raucous and rowdy gave vent to their anger in a place where there was no law other than the six-shooter. Legends of the frontier and American West are buried in Mt. Moriah. The town’s sheriff Seth Bulloch’s grave is at a promontory above the graves below. Wild Bill Hickok, shot in the back of the head by an assassin playing cards in the old Saloon #10, rests beside Calamity Jane. Potato Creek Johnny lies nearby. Deadwood was a place of legends. It still is.

“Gambling was legalized in Deadwood in 1989. I’ve been here since it started,” Tom added. Well he ain’t that old.
“Gambling was always here in Deadwood. We just made it legal in 1989,” Bill Walsh, one of Deadwood’s modern legends, once said. Bill Walsh was a visionary. He bought the old Franklin Hotel, an amazing brick structure constructed in 1903 at the top of Main Street, saw its potential to draw tourists and turned it into a hallmark for the area.

“Bill named guest rooms after famous people. We’ve kept that,” Tom said. Bill used to keep period dress in the rooms for guests to wear down to dinner. He had a fine restaurant off the main lobby and more than one attractive lady donned a dress ball gown to join her Deadwood dude at table. The Franklin is old but new. It retains all the charm of a fine, old west classic hotel and all the brash effrontery of a gambling casino.

Tom Rensch and his partners bought the Franklin Hotel from Bill in 2005. His group already owned the modern Silverado Casino directly across the street. There is a stark contrast. Silverado is modern, flashy, all casino. The Historic Franklin Hotel is a gem despite the casino level’s brash and bustle.

Bill Walsh’s restaurant was taken out by the new owners to make room for gaming. Slot machines inhabit the area where once fine food was served in elegant surroundings. There was something missing that nagged Tom until he got to do it. “We wanted to put the original ballroom back. What we did, only a couple of weeks ago, was to put the restaurant back. It’s neat to have legends. We have people that come from all over the world. They tell us it is great to preserve Deadwod’s legends.”

The Silverado is itself a popular place for a Grand Buffet. “At Legends we have a fine selection of wines. We specialize in steaks. This restaurant is a great complement to the Grand Buffet. Some people don’t like a buffet. On occasion there is an hour-and-a-half wait over there. We send diners over here. We designed casual elegance at an amazing price,” Tom related.

Legends Steakhouse certainly is elegant. It is a restaurant atmosphere where diners can feel comfortable in jeans and flannel shirts yet enjoy some of the best beef in the world. The food is tastefully prepared and served with grace.

“Legends is named for people that have stayed here,” Andi McDermott said. She signaled to large framed photographs of famous people hung in a long corridor.

Andi and Kitchen Manger Chad Abrahamson do most of the cooking. Andi was born in the small hamlet of Wagner, South Dakota and grew up in the equally small town of Winner. She started as a server at Silverado 19 years ago. She described another philosophy that makes Legends special. “It is important for us to have a diverse wine list. We offer an unbelievable Silver Oak. Not everyone can afford that so we have all ranges of wines. We work with Cask and Cork a distributor that specializes in smaller wineries. We stock wines patrons do not see in every restaurant. Our owners are wine connoisseurs and helped design the list so we have a bottle of wine for every taste,” she explained.

Legends’ wine storage cubicle is in the center of the main dining room. It is dark wood with sparkling glass panels. The walls are stone. Each piece was placed by local artisans to create a perfect design and add grace to the surroundings. Wooden tables set with modern silver plate are accented with large copper-colored chargers and white linen napkins. There are tables with four arm chairs as well as banquettes. Each banquette is topped with oak panels set with leaded glass. Three energy efficient fire-like globes over tables provide comfortable lighting. A fireplace and carpet add to the decor. A separate dining room is divided with dark wood panels. The intimate bar area contains four white leather banquettes for dining and seven bar chairs for cocktails.

Legends wine list is exactly as Andi said it would be. They offer Moet and Chandon Imperial brut Champagne at $88 a bottle, as well as La Marca Prosecco at $11. Their Sauvignon Blanc from White Haven is $28, Coppola Diamond $24, Sivas Sonoma $25. For Chardonnay lovers Butternut is $26 the bottle, Benzinger Sonoma $27. Riesling Seaglass is $33. Pinot Noir fanciers will find Bridlewood at $26 and Kokomo Russian River for $52 a bottle. The Silver Oak Alexander is $114 a bottle. Fine wines are fairly priced with a careful selection to suit any palate and pair with any meal.

Steaks are featured for the main course as well as chicken, seafood and pasta. Dinners are served with salad or soup and a choice of a side that can include long grain and wild rice, potato au gratin, baked or Yukon gold mashed. Legends slow roasted bone in prime rib at $25.95 is the best, most succulent and savory 21 day aged, certified Angus beef to be had anywhere. Legends provides a grand portion that whets the appetite even before the first bite. Marbling gives a special savor to the meat making it tender and delicious. Legends center cut sirloin is a 10 ounce portion for $12.95. Their 12 or 16 ounce ribeye is succulent and savory, $16.95 and $19.95.

For lamb lovers the Colorado rack is $25.95. Maine lobster tails can be added or enjoyed as a meal for $9.95. Fresh Atlantic salmon with pineapple Pico de Gallo is $15.95. Roasted chicken breast with apple walnut chutney is $12.95.

The meats were so extraordinary there had to be a secret to the cooking. Legends kitchen is new and modern. “The grill is amazing. It is how they sear all the flavor in. It cooks from the top and doesn’t flame. That’s why it is so consistent, it doesn’t flame,” Tom Rensch explained.

Desserts were next with New York cheesecake and peach Bourbon sauce or a chocolate fudge tort, $6.95. The sweets are as tasty as they sound with a good cup of coffee. The bill of fare was not only extraordinary but fair. Diners at another table remarked when they received the check, “That’s all for what we ate.” The exclamation is testimony to Legends promise to provide excellent food at fair prices.

“This used to be Dirty Nellies downstairs at the Franklin. It was Bill Walsh’s bar. Bill put his heart and soul into the Franklin Hotel,” Tom reminisced.

“Dirty Nellies was a hang out. It was dark, smoky, sawdust on the floor,” Andi related. The old pub is gone and the space now reserved to fine dining resurrected as Legends Steakhouse.

Take time to walk along the corridor of legends. President William H. Taft stayed at the Franklin in 1911, John Wayne in 1939. Seth Bullock enforced the law in Deadwood in 1876, Buffalo Bill Cody visited. Babe Ruth stayed in 1922, Pearl Buck visited in 1930. Their photographs are among other legends that frequented the grand Franklin Hotel in Deadwood’s early days.