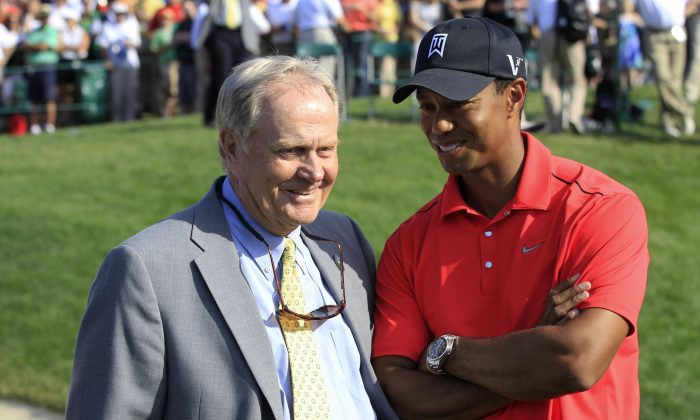 In this June 3, 2012, photo Jack Nicklaus (L) talks with Tiger Woods after Woods won the Memorial golf tournament at the Muirfield Village Golf Club in Dublin, Ohio. Nicklaus was in his customary spot behind the 18th green at Muirfield Village, waiting on the winner - or in this case, the survivor. Given the meltdowns by top players, this year without Tiger Woods has shown that it's really hard to win or that Woods was really good at it. (AP Photo/Tony Dejak)
Golf

Legends of the Links: Jack Nicklaus

The Open Championship is always contested on a links course. Dealing with weather is part and parcel for any competitor. Having sites devoid of trees with nearby major water bodies brings into play the vagaries of the bounce of the ball on firm and often fast running fairways—uncertain wind velocities can howl at any moment and unpredictable rain showers can emerge in total suddenness. Adaptability is central for the success of any player.

Much is quite rightly made of the five Open wins by American Ryder Cup captain Tom Watson. The eight-time major winner would have claimed a record tying sixth Open Championship in 2009 at age 59 if not for final bogey at the 72nd hole. While the total wins is impressive—what is often underappreciated is the 18-year-run by three-time champion Jack Nicklaus in the same event.

From 1963 to 1980 Nicklaus never missed the cut—winning three times, finishing runner-up seven times, and compiling three third-place finishes. His worst finish was 12th. It is the best sustained golf Nicklaus played in any major over the same time frame.

The runner-up finishes were often by the closest of margins in a number of cases. The most prominent being The Duel in the Sun encounter with Watson in 1977 at Turnberry. Both men broke the championship record easily and it took a final birdie from Watson to finally beat back the “Golden Bear” who holed an incredible 40-foot putt at the 72nd hole.

Nicklaus started in 38 Open events, making the cut in 32 of them—the best percentage he earned against in any major event. His overall 16 top-five finishes is the most Nicklaus attained in any major he played.

Watson’s Open record is also noteworthy. Between 1975 and 1984 he won five times, and if not for the stellar play from Seve Ballesteros in 1984, the Missouri-native would have claimed the title for three straight years with a win at The Old Course at St. Andrews.

Watson has played in 36 Open events—with 25 cuts made. He will play this week’s event at Royal Liverpool on a special exemption from the R&A and will compete in his final Open in 2015 at The Old Course at St. Andrews—fittingly, 10 years after playing with Nicklaus in his final Open Championship at the same venue.

The run of stellar golf from Nicklaus is often overlooked by many. Nicklaus was always in the hunt lurking in or near the lead. To have played that well for so long in weather and ground conditions that can vary greatly from day to day—beyond event to event—is truly one of the most remarkable stories not only for The Open Championship but in golf overall.