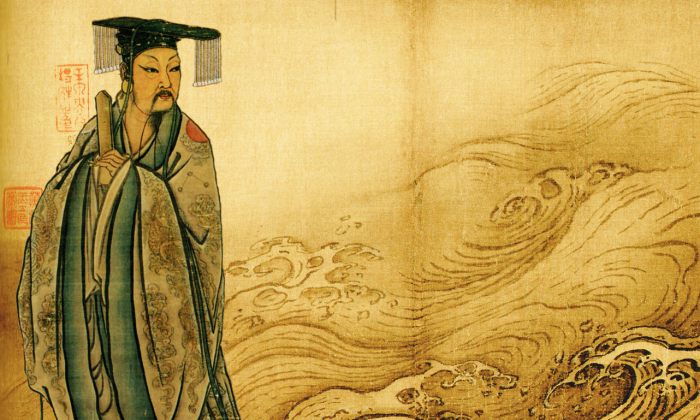 Legendary Foundations of Chinese Civilization: The Rule of Emperor Yu the Great

This is the eighth in a series of articles by Epoch Times staff describing the foundations of Chinese civilization, and setting forth the traditional Chinese worldview. The series surveys the course of Chinese history, showing how key figures aided in the creation of China’s divinely inspired culture. This instalment covers the reign and legacy of Yu the Great.

After bringing under control the cataclysmic flood that had inundated China for decades, Yu the Great became a key statesman under Emperor Shun. Working with other vaunted officials such as Hou Ji, the agricultural minister, and Gao Tao, the administrator of law, Yu’s task was to manage the officialdom itself.

While the flood had been subdued, it remained to be seen how China might be unified. The ravages of the disaster were far from being repaired, and chaos reigned. In the regions populated by the San Miao people, for instance, a despotic rebel regime that Emperor Yao had vanquished had again risen to strength.

Yu the Great appealed to Emperor Shun for permission to quell the unrest among the San Miao. “My moral qualities are limited,” Shun said. “But force of arms is not the way.” Yu took this to heart and spent three years influencing the San Miao using virtue instead of violence.

One day in the fourteenth year of his reign, Emperor Shun was performing the odes of Shao with an ensemble of subordinates when a great thunderstorm began. The powerful winds threatened even wooden constructions, and many of the players’ instruments were smashed. While his subordinates panicked, the 80-year-old Shun maintained his composure.

“Indeed, I cannot call this realm mine alone to govern,” the emperor spoke in prayer as he rose and rearranged his clothes and hat. “The august heavens are giving me a sign that it is my duty to follow in the steps of Emperor Yao and abdicate to a man of intelligence and integrity.”

Regarding his courtiers and ministers, Shun saw none greater than Yu in his mastery of morals and virtues. “I thus recommend Yu to the august heavens and pray for his succession. Should he not be the one to shoulder this responsibility, let the rain fall heavier and the thunder sound louder so that I may be warned of my folly. But if he is the one, please let end the storm.”

No sooner than these words were spoken, the rain and thunder disappeared and gave way to sunlight.

The next year, there was a sighting of an azure dragon, which greatly pleased Emperor Shun and his subordinates. All came to bow and give song to their ruler, believing the omen to be a sign of his vast virtue.

But Shun, sensing that the heavens wished for something different, sang a different song. In it he announced his intentions to abdicate in favor of a wise ruler and leave government.

Sure enough, more omens appeared. In the 42nd year of Shun’s reign, the grass and woods did not wither even with the onset of fall. This, Yu remarked, was because the energy of the wood element (one of the five elements in the traditional Chinese understanding) was in prosperity.

Hearing this, Shun laughed and responded that the virtues of Yu belonged to that of the wood element, which absorbs water and is symbolized by the color green or azure.

Taken together with the appearance of the azure dragon, Shun proclaimed, the lush deciduous plant life was an auspicious sign from heaven that it was time for Yu to shoulder the duty of imperial rule.

Emperor Shun thus abdicated in a solemn ritual. He took care to ensure that it mirrored in every detail the ceremony that Emperor Yao had held decades before.

Emperor Yu is credited with founding the Xia Dynasty—the first in Chinese civilization. He had originally wanted to continue the tradition of abdicating in favor of an appointed sage, as had been the case with Emperors Shun and Yao, but the ministers all requested that Yu’s son, Qi, inherit the throne.

Upon ascending the throne, Yu the Great first offered sacrificial rites to heaven, earth, and the gods. He then prayed to heaven that he might be granted the wisdom to manage the country.

Through gradual studies, Yu researched the Inscription of Luo and derived from it the Hongfan Jiuchou theories of governance. These contained the nine duties of the emperor.

According to classical Chinese histories, Emperor Yu’s government laid the foundation for Chinese feudalism, a system in which dukes and princes each paid tribute to a common sovereign to vouchsafe their loyalty. At a grand gathering of nobles on Mount Tu, Yu had all the bronze—delivered as tribute from the nine feudal states—melted down and recast into nine ancestral vessels with elaborate inscriptions and images.

The nine vessels represented each of the feudal states, and embodied the mandate of heaven—that is, the right of the Xia to rule only at the discretion of the divine.

When the Xia Dynasty was brought to an end, the Shang Dynasty inherited the vessels, which again changed hands about 3,000 years ago when the Shang were defeated by the Zhou Dynasty.

‘Law of the Heart’

Yu also made a key contribution to Chinese spirituality. The new emperor is said to have left a commandment of sixteen words about human morality and ascetic cultivation, but the fundamental concept is the teaching of xinfa, the “law of the heart.”

In Chinese tradition, the object of human life was understood not to be the fulfillment of earthly desires, but rather to seek and align oneself with the Tao or Way. The will to follow the Tao, Yu taught, was the true essence of humanity—that is, to be one with heaven, earth, and nature on the path to becoming a superior man and even a divine being.

At the same time, such lofty aspirations are vulnerable in the face of human sensual pleasure, which, if left unchecked, lead to wickedness and depravity, Yu said.

From Legend to History: Reflections on the Era of Yao, Shun, and Yu

Yao, Shun, and Yu the Great are remembered as sage-rulers sent by divine mandate to lay down the basic forms of traditional Chinese civilization. They established a culture that stressed the moral harmony and coexistence of heaven, earth, and mankind. Before Yu, the rulers of this era abdicated their positions to appointed sages after careful ceremonies to divine the heavenly mandate.

With his great compassion, Emperor Yao promoted morality and virtue among the people. As he advanced in his personal cultivation, he guided and inspired his subjects to honor their families and live alongside each other in harmony, while the ministers cooperated and made great accomplishments under his rule. The myriad clans were in unison, and Yao received from heaven the Yellow River Chart and the Inscription of Luo, used to divine the waxing and waning of dynasties yet to come.

Emperor Shun continued the virtuous rule of Yao by educating the common folk with morality, carrying out his administration with mercy, and managing the home according to the principles of filial piety. He established regulations for government and a criminal code to punish and reform offenders, before abdicating the throne in favor of Yu and completing his spiritual cultivation. Shun received the awe of later generations, and the ethics he fostered became the standards for human interaction.

Yu the Great subdued the Great Flood and established the Nine States. Starting the Xia Dynasty, he finalized the creation of the Chinese realm and its divinely inspired culture. Under his enlightened rule, Yu’s system of order reached even remote and desolate regions.

In this legendary era, the people revered heaven and cultivated their moral quality. Following the advice of those who attained the Tao, they could gain inspiration from gods and accomplish miracles in times of unimaginable tribulation.