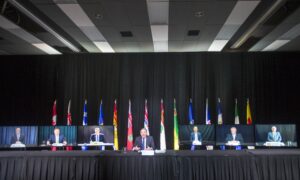 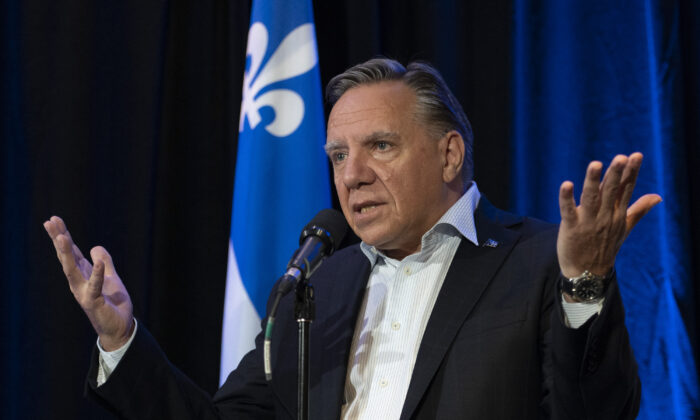 Legault in Favour of Conservative Minority, Wary of Liberals, NDP and Greens

In the wake of the Sept. 8 French-language debate, Quebec Premier Francois Legault said he is in favour of a Conservative minority government, while being critical of the Liberals, NDP, and Green Party.

“The Conservative Party has been clear: they want to increase health transfers with no conditions, they want to transfer immigration powers, and Mr. O’Toole has committed to not funding opposition to Bill 21,” he said during a press conference on Sept. 9.

“For the Quebec nation, Mr. O’Toole’s approach is a good one.”

However, Legault said he is concerned the Conservative leader would scrap the $6 billion in child-care funding the federal Liberals promised to Quebec.

The Conservatives’ full policy platform, released on Sept. 6, says a Conservative government would cancel the Liberals’ nationwide $30-billion child-care program and replace it with a refundable tax credit covering up to 75 percent of child-care costs for low-income families.

As for the Liberals, NDP and Greens, Legault said “they’re not ready to transfer power to the Quebec government in immigration, and they don’t exclude to be part of the suit against Bill 21.”

“So for the nation of Quebec, for those who would like to protect our nation, I think we have to be careful with those three parties,” he said.

“I am a nationalist. I want Quebec to be more autonomous, to have more powers. There are three parties, the Liberal party, the NDP and Greens, who want to give us less autonomy. I find that dangerous.”

Asked for his position on the Bloc Québécois, Legault dismissed Bloc Leader Yves-François Blanchet, saying he “cannot form the next government” as he doesn’t have enough candidates.

Legault’s approval of O’Toole sparked criticism from Quebec Liberal leader Dominique Anglade, who accused him of trying to “abandon” parents and children in his province.

“By wishing for the election of a conservative government,@francoislegault agrees to tear up the $ 6 billion agreement and abandons the parents, the children and the entire network of childcare services in Quebec,” she wrote on Twitter.

Legault said he would not tell Quebecers how to vote in the election.

“It’s up to Quebecers to choose, but I’ll tell you this. I’m a nationalist. I want Quebec to have more autonomy and power.”