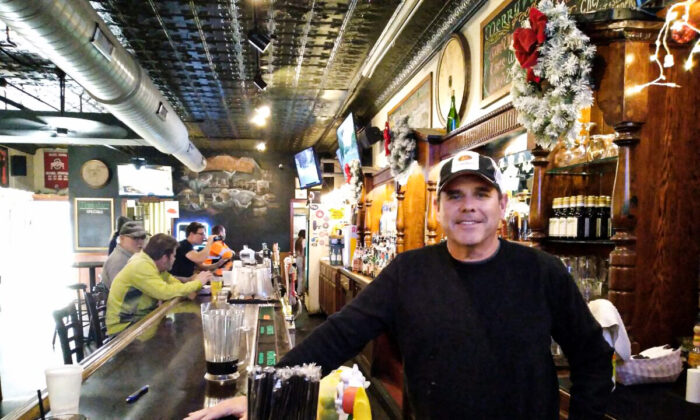 John Granzier, owner of Merry Arts Pub and Grill, the oldest bar in Lakewood, Ohio, said on Dec. 10 that he'd be glad to place a sports betting kiosk in his suburban Clevleand establishment. Ohio's legislature passed House Bill 29 and Gov. Mike DeWine next will review it. The state could make betting licenses available to eligible businesses as early as April, 2022. (Photo by Michael Sakal/Epoch Times).
US News

Legal sports betting is on the table in Ohio in 2022.

Ohioans may be able to bet on sports as early as Major League Baseball’s opening day, but for now a bill that would legalize the activity is awaiting the signature of Gov. Mike DeWine (R).

The Ohio General Assembly passed a bill on Dec. 8 that makes sports betting legal in the Buckeye State with 10 percent of the proceeds from the betting trickling down to Ohio’s schools.

The bill’s passage comes three years after much discussion and debate over the issue while other states such as Pennsylvania, Michigan, Indiana, and West Virginia established legal sports betting following the 2018 U.S. Supreme Court ruling that overturned the federal ban on state authorization of sports betting.

The state would tax the betting vendors 10 percent. Of the revenue generated, the majority would go toward public and private schools and two percent would help fund gambling problem programs.

Under the legislation, the number of those eligible for betting licenses inside their establishments in Ohio would be limited. Under the pending law, “thousands” of bars and restaurants now are eligible to receive licenses through an application with the state.

Sports betting is projected to generate $20 million in tax revenue for the state per year, according to legislative researchers.

A timeframe for DeWine to review the bill has not been announced, but he is required to sign it within 90 days.

Sports betting licenses could be issued beginning in April 2022 and no later than by January 2023. Regulations for the betting could take longer to establish, according to the General Assembly.

Those 21 years old and older would be allowed to bet.

DeWine has been supporting the bill to get Ohio on board with other states.

“Sports gaming already is in Ohio, Ohio’s just not regulating it,” DeWine said in a statement. “This was something that was inevitable. It’s coming to Ohio.”

Sports betting would be overseen by the Ohio Casino Commission.

John Granzier, the owner of  Merry Arts Pub and Grill, welcomed the news of the bill’s passage. The pub is in the west Cleveland suburb of Lakewood that is densely populated with independent bars and restaurants and is a destination for young professionals and the college-age crowd.

“This opens up a whole new world for us,” Granzier, who has owned the pub for 21 years, told the Epoch Times. “We would be more than happy to have a kiosk in here for sports betting. People who like to casually bet can place a bet instead of just standing there and doing it secretly.

“Hopefully, the state will award licenses by the amount of volume you do with the Ohio Lottery,” Granzier added. “According to our lottery agent, we sold the 15th most Keno tickets in the state. That’s a lot of tickets.”