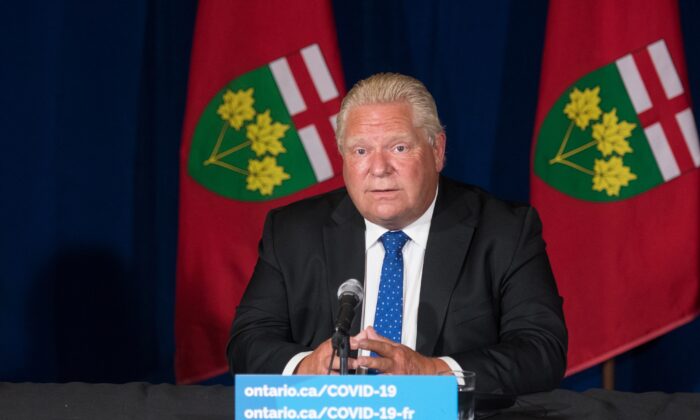 A non-profit legal organization is challenging the Ontario government over its latest announcement to implement vaccine passports across the province starting Sept. 22.

The Justice Centre for Constitutional Freedoms, also a freedom advocacy firm, said that the announcement made by the provincial government on Sept. 1 is a “new and unprecedented medical order meant to coerce Ontarians to receive Covid-19 vaccines.”

“These new vaccine passport laws grant the government a plethora of power that can allow the Province to create similar and further far-reaching measures in the future,” said the Justice Centre in a press release on Sept. 1.

Under the new vaccine certificate policy, Ontarians must be fully vaccinated with two doses of COVID-19 vaccines, and show their vaccination status to access services such as restaurants, bars, gyms, and other indoor facilities. The certificate does not apply to grocery stores, pharmacies, retail stores, hair salons, and outdoor facilities where the “risk of transmission is low.”

The Ontario government is working on creating personalized QR codes for vaccinated individuals, which is set to roll out on Oct. 22. The QR code can be printed or stored on smartphones. An app for businesses to scan and confirm the contents of the QR code is under development and is also expected in October.

The Justice Centre said such measures will create a two-tier society where the unvaccinated residents are prevented from accessing goods and services that Canadians are entitled to in a free and democratic society.

Jorge Pineda, staff lawyer with the Justice Centre, says it is a “blatant and unjustified violation of Charter rights and freedoms.”

“These new regulations impact the choice that Ontarians have over their personal bodily autonomy, they stigmatize the unvaccinated, and they strip away the choice of business owners to decide how they wish to conduct their business,” he said in the press release.

Premier Doug Ford has said that the vaccine certificate is a “temporary tool,” but how long the measure will be in place will be based on the COVID-19 data collected and advice of the Chief Medical Officer of Health, according to a statement from Ford’s office.

At the vaccine certificate announcment on Sept.1, Ford said the COVID-19 vaccines are safe and “the best protection” for Ontarians.

But the Justice Centre disagrees. It argued that the vaccines are “experimental” as they are still new and clinical trials won’t be completed until 2023.

“Each of the shots also contain warnings from Health Canada, including warnings about pericarditis, myocarditis, and thrombosis. It is unthinkable that any government would require these experimental injections as a condition of full participation in society, yet this is what governments are doing.”

By “coercing Ontarians to inject Covid vaccines which are still undergoing human trials,” it violates Section 7 of the Charter, which guarantees protection of “life, liberty and security of the person,” the centre added.

In addition to Ontario, three other provinces have introduced a vaccine passport system including B.C., Quebec, and Manitoba. B.C.’s system has some of the most stringent rules in Canada, including that no exemptions would be granted to those with rare medical conditions, when the system comes into effect on Sept. 13.

The Justice Centre contends that such measures violate the principles of equal treatment under the law protected under the Charter.

“Individuals who have not been vaccinated for a variety of reasons including religious belief, creed, and medical issues will now be segregated and their participation in society will become limited to what is deemed ‘essential’ by the government,” the centre said.

Pineda said the Justice Centre is reviewing the new laws and considering challenging them in court.

“It will be up the Courts to decide whether the Charter’s protection of life, liberty and security of the person will ultimately triumph.”

A petition to stop vaccine passports across Canada has since been launched by the Canadian Constitution Foundation, a non-profit organization which seeks to defend the constitutional freedoms of Canadians.

The petition urges Canadians to tell their premiers to “not bring in vaccine passport policies” that will tread on civil liberties and invade their privacy rights.

It also encourages supporters to not just sign it, but share on how the policies will affect them, as they may be considered by the foundation to become potential applicants to challenge “these unjust regulations.”