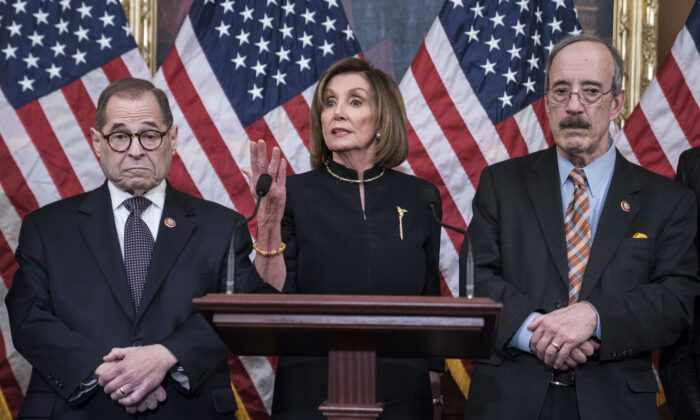 He also said that the Senate has its own rules not subject to the House of Representatives.

“Under the Constitution, the Senate writes its own rules not subject to the approval of the speaker of the House or even the majority of the House,” Napolitano said on Fox News Thursday morning.

President Donald Trump “is entitled to a trial to seek exoneration,” said Napolitano. “If these articles just sit on the speaker’s desk and go nowhere, that would be a profound and grave injustice to the president.”

He added that Pelosi “probably won’t surrender those articles to the Senate until she gets a commitment to what the trial is going to be.” However, he noted that it’s “correct” to say that it isn’t Pelosi’s choice.

On Wednesday night, after the House passed both articles of impeachment along a party-line vote, Pelosi told reporters that “so far, we haven’t seen anything that looks fair to us” in the Senate. “That would’ve been our intention, but we’ll see what happens over there.”

“We have legislation approved by the Rules Committee that will enable us to decide how we will send over the articles of impeachment,” Pelosi said to reporters Wednesday. “We cannot name [impeachment] managers until we see what the process is on the Senate side.”

House Intelligence Committee Chairman Adam Schiff (D-Calif.) said he agrees with the possible move to delay the articles in the Senate.

Senate Majority Leader Mitch McConnell (R-Ky.) has indicated that he will coordinate the trial with the White House and has said the president is expected to be acquitted by the Republican-majority chamber. He has said he would prefer a relatively short trial, where House managers present the case to remove Trump and Trump’s defense team offers counter-arguments—something not granted in the initial House hearings.

Pelosi wouldn’t answer questions on if she was looking to indefinitely hold the articles of impeachment in the House. “We’re not having that discussion,” she said, as reported by to The Washington Post.

McConnell is expected to hold a press conference Thursday morning. According to a reported transcript of his remarks, he will say that “framers built the Senate to provide stability … Moments like this are why the United States Senate exists.”

Trump has maintained his innocence in the face of Democrats’ allegations against him, regularly calling the entire impeachment effort a “sham” and a “Witch Hunt.”