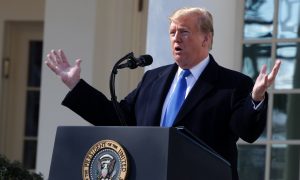 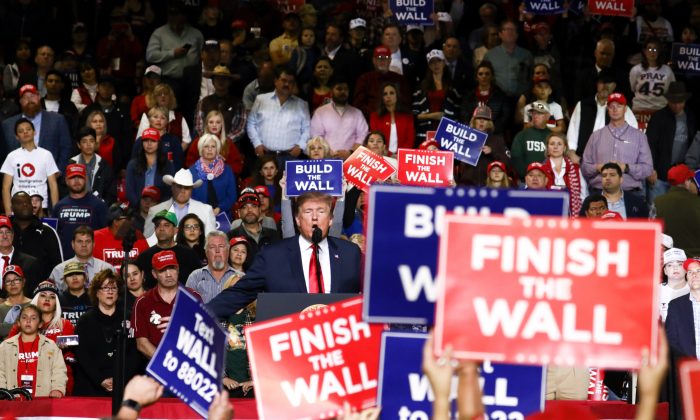 Four left-leaning environmentalist groups have filed federal lawsuits against the Trump administration, in hopes of blocking the president’s national emergency declaration that seeks to redirect $6.7 billion in already allocated funds to build a wall on the nation’s largely undefended border with Mexico.

The legal actions came as a violent protest broke out against the declaration not far from the border in Texas, as a group of states are contemplating filing their own lawsuits, and as opponents on Capitol Hill prepare lawsuits and ready a legislative effort to have Congress reverse the declaration.

Dozens of radical demonstrators took over and vandalized the National Border Patrol Museum near El Paso, Texas, on Feb. 16, the Washington Examiner reported.

President Donald Trump invoked the National Emergencies Act on Feb. 15 as Congress gave final approval to the 1,169-page, $333 billion omnibus spending bill that funds the government through the federal fiscal year-end of Sept. 30.

The fiscal measure, which Trump signed into law after saying he was “not thrilled” with it, contains $1.375 billion for 55 miles of border barriers in the Rio Grande Valley in Texas, which is separate from the $6.7 billion generated by the emergency declaration. The $1.375 billion is less than the $5.7 billion the president sought for a border wall. The $5.7 billion request itself is a fraction of the $25 billion Trump originally said he wanted.

There is no guarantee those 55 miles will actually be built. The legislative language stipulates that “prior to use of any funds made available by this Act for the construction of physical barriers,” the Department of Homeland Security “shall confer and seek to reach agreement regarding the design and alignment of physical barriers within that city.” Local officials in the liberal border counties in the Rio Grande Valley are known to be hostile to building a wall.

The legal actions come as California and about a dozen other states are reportedly preparing to sue the federal government to stop the wall, the president’s signature campaign promise.

Public Citizen, a nonprofit founded by consumer advocate Ralph Nader, filed a lawsuit Feb. 15 seeking to invalidate the president’s proclamation issued under the National Emergencies Act, on behalf of the Frontera Audubon Society of Weslaco, Texas, a nonprofit organization, and three Texas landowners.

The nonprofit claims in the legal complaint that its “members’ ability to observe wildlife will be impaired by the construction of a border wall and the resulting destruction of critical habitat.”

It also states that the construction of the wall would endanger “rare wildlife habitat and specific species” such as the jaguar, ocelot, peninsular bighorn sheep, and the Quino checkerspot butterfly.

Citizens for Responsibility and Ethics in Washington (CREW) filed a lawsuit Feb. 15 that seeks to compel the Department of Justice to comply with its request under the Freedom of Information Act for legal opinions produced by its Office of Legal Counsel “that discuss the power of the president to invoke emergency powers to build a wall or other type of barrier along the U.S. border with Mexico.”

All three lawsuits were filed in the U.S. District Court for the District of Columbia.

California Gov. Gavin Newsom, a Democrat, said his state would file legal proceedings to halt the wall planned for a thousand miles away in Texas. “Our message back to the White House is simple and clear: California will see you in court,” he said.

“If filed, the lawsuit would mark the state’s 46th legal challenge to Trump administration policies,” the Sacramento Bee reports.

Xavier Becerra, attorney general for California, said Feb. 17 his state is working with “sister state partners” to “imminently” bring a lawsuit. “It’s become clear that this is not an emergency,” said Becerra, also a Democrat.

New York, Washington state, and El Paso County, Texas, say they, too, will litigate. So will the Niskanen Center, a left-wing think tank, and the Border Network for Human Rights, a Texas-based group that says it advocates for “marginalized border communities.”