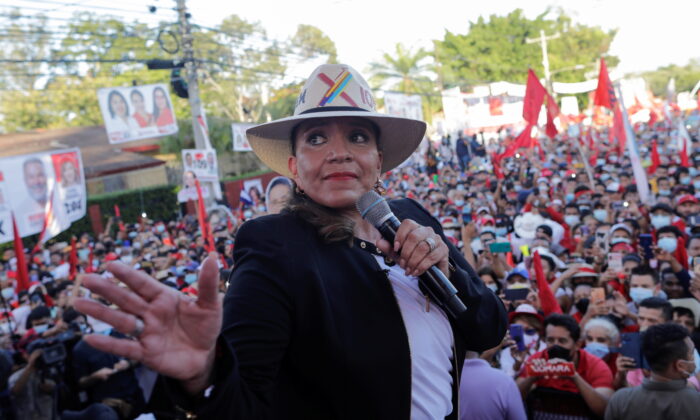 SANTA CRUZ, Bolivia—The new president of Honduras is a woman—the first one elected to that position in a country ranked second in the world in murders of women.

Democratic socialist Xiomara Castro won the presidency on Nov. 30, after which the candidate for the National Party, Nasry Asfura, conceded defeat and congratulated her for her victory.

A woman is killed every 23 hours on average in the country.

In Honduras, the femicide rate is 6.2 per 100,000 people, according to the U.S. Institute of Diplomacy and Human Rights.

Vasquez currently lives with her mother, after what she called the “nightmare” of escaping the father of her two children, who became increasingly violent when she lived with him in 2016.

Back then, Vasquez lived with her kids and “Miguel” in the city of Tocoa. After a string of increasingly violent physical attacks, she filed charges against him with the police on three occasions.

“They [the police] treat you like you’re a nuisance when you come in, even if you’re bleeding,” Vasquez said.

She said that during one episode, he came home intoxicated and tried to push her face onto a lit stove burner in the kitchen after a brief verbal altercation.

Six months passed before the police eventually granted Vasquez a restraining order against Miguel, but she still decided to move herself and her children away from Tocoa.

“I needed my family and to feel safe,” she said.

The criminal justice system in Honduras has the reputation of being ineffective at bringing violent criminals to justice.

Political pressure, harassment, and threats from both the government and organized crime affiliates contribute to the nation’s low rate of convictions by judges, according to the United Nations Human Rights Watch.

“Judges that can’t be touched by corruption are among the things needed most,” Latin America political analyst Fernando Menéndez told The Epoch Times.

Menéndez believes that much of the violence against women in Honduras stems from the country’s long-standing role in the drug trade.

He said that when there are no consequences, and police and judges can be bought off, there’s little incentive to avoid settling emotional disputes through nefarious methods.

Situated on the narco trail between the northern and southern half of the Americas, Honduras sees around 4 percent of all cocaine coming out of South America pass through its territory. This equates to an estimated profit of $11.5 billion, according to one report.

Menéndez said it’s also one of the factors driving the wave of migration toward the United States.

“It’s like living in the Wild West. There is no law.”

Domestic violence reports increased during 2021, partly due to the aftermath of pandemic restrictions, which complicated existing poverty issues in the nation.

Honduras is one of the poorest countries in Latin America.

On Nov. 20, Castro stated, “The sacrifice of our martyrs was not in vain. We will initiate an era of prosperity of solidarity through dialogue with all sectors, without discrimination and without sectarianism.”

“We need more than a new president to resolve the violence,” she said.

“Will she [Castro] get to the root of violence against women in Honduras? I doubt it.”