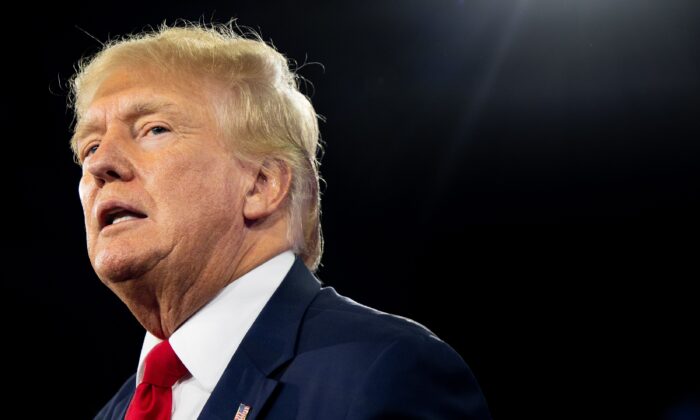 Legal experts told The Epoch Times that much of the mainstream media reporting about Trump-appointed judges benefiting former President Donald Trump with improper rulings is a sign of rampant media bias rather than a sign that the judiciary is beholden to Trump.

In the most recent occurrence, the left-leaning media outlets have criticized U.S. District Judge Aileen Cannon for agreeing with Trump to appoint what’s known as a special master to referee between Trump and the Department of Justice (DOJ) over the documents recently seized during the FBI’s raid on Mar-a-Lago. The DOJ has appealed this ruling.

The special master, if appointed, will help decide which documents might be confidential communications between Trump and his lawyers or evoke executive privilege, and therefore, off-limits from the DOJ seizure.

Judge Cannon is a Trump appointee to the bench.

“The rulings with respect to the Mar-a-Lago raid and related issues are that judges can have divergent views of the law, but I don’t think with life-tenure of judges and with the fact that no president can fire them that judges have any particular reason to be in favor of Trump or otherwise against Trump,” Ilya Shapiro, a senior fellow and director of constitutional studies at the Manhattan Institute, told The Epoch Times.

Shapiro said that over the course of Trump’s legal history, a number of Republican and Democrat judges have ruled both against the former president and for him, and the only thing to talk about is the quality of those decisions.

“Evaluating judges’ decisions should focus on how they apply the law to reach a result, not simply on what that result might be or the party of the president who appointed them,” Thomas Jipping, a senior legal fellow at the Edwin Meese III Center for Legal and Judicial Studies at the Heritage Foundation, told The Epoch Times.

“It borders on deliberate misinformation, for example, for the media to observe only that Judge Cannon was appointed by President Trump and to ignore the actual merits of her decision,” added Jipping.

And it ignores the possibility that a disgruntled party in a legal case can appeal to have legally flawed decisions reviewed by higher courts that very well may reverse decisions.

“I’ve read Cannon’s opinion and it seems pretty sound to me,” Paul Kamenar, chief legal counsel for the National Legal and Policy Center (NLPC), who litigates against the federal government for a living, told The Epoch Times.

“So I would take those criticisms with a grain of salt, being the peanut gallery taking cheap shots at her opinion, which can be appealed, if the [DOJ] thinks it was legally flawed,” Kamenar added.

The attacks on the judiciary in the Trump case and other cases, such as the Supreme Court’s decision of Dobbs v. Jackson that overturned Roe v. Wade and remanded abortion rights back to the states, is a threat to our political system much greater than the much-publicized “danger to democracy” that left-leaning media and the establishment narrative have pushed since Trump left office, said the experts.

“Well, this is one of the ironies that are increasing: Some are expressing concerns, particularly from the left, about the fate of our democracy and the rule of law and these sorts of things,” Shapiro said.

“But impugning the motives, or qualifications of federal judges is actually what’s undermining our system of governance and the popular confidence in the integrity of our institutions,” he added.

Federal judges are highly insulated from politics in order to make their decisions much less dependent on the whims of political and media pressure, the experts said.

“Judgeships in these cases are lifetime appointments, so they are at liberty to rule without fear that they will not be elected again in the next election,” Kamenar said.

Kamenar then went on to detail a number of Supreme Court appointments by Republican presidents that were highly disappointing for conservatives, including the appointment by President Richard Nixon of Justice Harry Blackmun, who wrote the then-highly controversial Roe v. Wade decision in 1973.

“Eisenhower appointed Earl Warren, who was soft on crime, and William Brennan, who were two of the most liberal justices that were ever on the bench,” said Kamenar, noting that Eisenhower rued the day he selected them.

The Warren court, which spanned from 1953 to 1969, is considered by many scholars from both the left and the right, the most liberal court in American history.

President Ronald Reagan appointed Justice Anthony Kennedy, who became part of the more liberal voting bloc and a swing vote, often siding with progressives. Justice David Souter, who was appointed by George H.W. Bush, was supposed to be a solid Republican justice from New Hampshire, turned out to be one of the most liberal justices ever, said Kamenar.

“The liberal media claims every ruling by a Trump-appointed judge is the final nail in the coffin of our democracy, but we all know it’s left-leaning judges who take an activist approach,” said Davis.

“Democrats know they can’t win public debates and enact their agenda legislatively, so they weaponize the courts to accomplish their goals,” Davis alleged.

Trump carefully selected constitutional conservatives who seem to be intent on rolling back the excesses of the Warren court, said Kamenar, and that’s what is behind the increase in attacks on the judiciary: fear that the court will now, finally, terminate the big, progressive state.

“That’s their main thing, and that’s why progressives had all these ads on TV against Kavanaugh and Gorsuch, which was clearly politicizing the process,” he said about the nomination of those two conservative Supreme Court Justices.

Kamenar cited an incident two years ago when Sen. Chuck Schumer (D-N.Y.) was outside the Supreme Court and appeared to threaten conservative justices by name as they deliberated a case involving abortion, about which the NLPC filed a bar association complaint for unethical intimidation of the judiciary.

“I want to tell you Gorsuch. I want to tell you Kavanaugh. You have released the whirlwind and you will pay the price. You won’t know what hit you if you go forward with these awful decisions,” Schumer said on the steps of Supreme Court, using an amplified public address system, drawing a rebuke from Chief Justice Roberts.

“Conservatives, on the other hand, are ‘deactivating’ the activism of the liberal justices, if I can coin a term, who found rights that were not in the Constitution,” added Kamenar.

But none of it has to do with protecting former President Trump, said the experts.

“It’s shorthand to talk about Republican-appointed judges and Democrat-appointed judges and there is some correlation to how they see certain types of politically salient legal issues in terms of Trump’s personal stuff,” said Shapiro, who emphasized the legal philosophy grounding those decisions.

But Shapiro said he doesn’t think it’s because Trump appointed them that they rule any particular way.

“It’s not like he was appointing his entertainment lawyers or other kinds of unqualified people from his casinos or personal businesses. He was appointing people who have credentials to be sure, but they aren’t ‘Trumpy’ judges,” Shapiro said.

And to argue that they are overly political or personal in their rulings is one of the biggest threats to our republic that we face, as it undermines public confidence in our court system, the legal experts said.