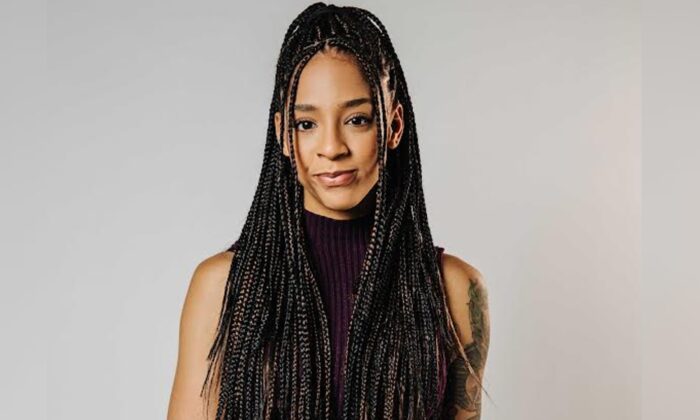 As the religion of “wokism” continues to grow, censor, and demand sacrifices in the form of shame-induced public apologies at its alter, former leftist-turned-conservative podcasters seek to unapologetically question its pervading narratives.

“We are seeing young people grow up with the mindset that they need to reduce themselves down to race, gender, and their sexuality,” Amala Ekpunobi, host of the podcast “Unapologetic,” told The Epoch Times. “Those three very superficial identities have become so pivotal in how people introduce themselves and whether they are viewed as victims or champions. The more we go down the path of this false narrative, the more we are oppressing them and entertaining a culture of victimhood that is sheerly unsustainable.”

Ekpunobi found herself a voice on PragerU’s (Prager University) conservative media platform with her podcast after her left-leaning worldview began to crumble under the scrutiny of her own critical thinking.

“I think the most hard-hitting issue for me was race,” Ekpunobi said. “I grew up in a white family. I’m biracial. My father is from Nigeria, and my mother, who works with the political left, is white.”

As a child, Ekpunobi aligned herself with her mother’s views, becoming an activist throughout middle and high school, she said, until she became a paid activist after graduating.

It was then when she began observing hypocrisy within the organization, she said.

“I heard a lot of racism toward white people behind the walls of this organization,” she said.

Ekpunobi confronted the organizers about it, asking how they could claim to be the tolerant, anti-racists when they themselves were making racist comments.

“I was told that I was simply unaware of how oppressed I was and that it wasn’t their fault that I wasn’t angry, but that I should be because of how I was treated in this country,” Ekpunobi said.

From there, Ekpunobi researched ideas that didn’t reinforce but instead challenged her preconceived notions, she said.

She discovered social theorists and commentators such as Thomas Sowell and PragerU co-founder Dennis Prager, she said, which, for her, “started a new journey,” she said.

“I had always grown up with the idea that white people carry these inherent biases and that they were a part of a structure of oppression that was working against me, whether they knew it or not,” Ekpunobi said. “So, it was really difficult there toward the end to justify having those opinions, then going home to a family who cared for me.”

‘I Was Becoming Increasingly More Conservative’

The worldview is limiting and distorted, Ekpunobi explained, and it’s robbing young people of their opportunity to have fulfillment in life and a vision of a future in which they can choose from a wide range of vocations, unlimited by their race and gender.

After leaving the left, Ekpunobi also exited the political conversation to pursue a nursing degree, she said.

“I did that for a while, but in the background, I was becoming increasingly more conservative,” Ekpunobi said.

The view from the conservative angle presented a new issue, she said, in that the majority of media platforms cater to cultivating a liberal mindset, even on seemingly insignificant social media apps such as TikTok.

“The app has a ‘For You’ page that shows content based on my demographic, and it was sending me videos that had a liberal political message,” she said. “This is a platform for millions of impressionable young people, and they’re all getting similar content.”

To provide an alternative message, Ekpunobi made her own videos in which she discussed her journey and how she arrived at her conservative belief system.

“Out of nowhere, they just blew up, and some of them landed on the desk at PragerU,” she said. “They reached out to me, flew me to Los Angeles to tell my story, and offered me this job.”

On “Unapologetic,” Ekpunobi examines news stories, pop culture, and social issues through a rational lens in an attempt to make sense of what is becoming a social climate of irrationality that has infected too many facets of life.

One of the key problems, Ekpunobi said, is the absence of open discourse.

“When I started making these political videos with conservative takes, they were met with a lot of hate and censorship,” she said. “If ideas that are dissident to the wokeness that we are experiencing right now are unavailable, wokeness is going to thrive. That’s why we need to foster conversations, especially with people who have different values and beliefs.”

Like Ekpunobi, ex-Democrat Judith Rose’s shift from woke to awake took place after an investigation into her own programming and its sources.

“I had not been in a great place in my life, so I think that had a lot to do with why I was accepting of programming before that,” Rose said. “I think a lot of our popular social movements today capitalize on people’s mental illness.”

Similar to how Ekpunobi got on the radar of PragarU, Rose made a TikTok video in which she addressed her transforming belief system, which she described as “the hardest pill to swallow of the century.”

It went viral, and she found herself in the media limelight, giving several interviews on alternative media platforms throughout a six-month period in 2020.

Rose had begun to see an agenda behind every message broadcasted from legacy media outlets, she said, and those messages appeared to be making people sick.

Instead of clinging to old ideas that stopped working, she looked toward changing her perspective by listening to other views, such as conservatives, she said.

“I had to admit I was wrong on a lot of issues and re-examine things,” she said. “I’ve had to do that multiple times over the last couple of years, so it’s been quite a journey.”

It wasn’t only about researching new ideas, but also about making changes in her own life, she said.

“It wasn’t fun,” she said. “People I thought were my friends reached out to me to say it sounded like I was going crazy. The people I was around I just didn’t align with anymore.”

However, for Rose, she said she had never felt saner.

“I feel a lot better than I used to because it’s like I’m coming up for air after not even realizing I was drowning,” Rose said. “It’s bizarre to understand so many perspectives at once. A lot of people feel disconnected when that happens to you, and they don’t see you the same way because you don’t see them the same way.”

Like Ekpunobi’s discovery that TikTok was curating narratives to particular demographics, Rose observed that—just as she had been in her own life—certain websites were radicalizing people into believing and behaving in ways that weren’t congruent with reality.

“Even after getting off social media, I could see that I was being radicalized through fake media news that crafts these emotional, opinion-based headlines,” she said. “That’s what was happening to me: I had been flipping through these headlines and basing my opinions on those.”

What passes for so many as education and news, Rose said, is in fact propaganda designed as a component of manipulative social experiments with the endgame of dehumanizing and controlling people.

“People are being introduced to ideas that they normally would have no reason to look at, and then there’s this mechanism that’s adopting new terms and changing language,” she said. “It’s very Orwellian, and it’s very unsettling.”

Rose also observed what she believed to be not only a mental illness, but a spiritual sickness behind the “extreme emotional reactions” in herself and in others when their ideologies came into conflict with opposing views.

“I had to sit down and acknowledge that I was overly angry and didn’t understand why,” Rose said. “I had to do a lot of meditating, and reaching out to God and say, ‘Hey, I don’t understand this world, can you help me?’”

In recognizing and addressing the spiritual side of her journey, Rose said she was eventually able to achieve wellness that brought clarity.

“I had this one meditation in which I felt like a weight had lifted,” she said. “Suddenly, I was more level-headed and ready to move forward in my life.”

Former beliefs turned inside out, perceptions changed, and her discernment increased, she said.

“I don’t know how that happened, but I credit God for that,” she said.

From this new place in her life, Rose said she believes that there’s a system working against the human race with the intent of dividing and conquering.

‘A Voice of Reason’

Since her shift, Rose said she’s felt called to share her insight on her platform, which includes her podcast, “Questioning Everything.”

On her podcast, she doesn’t shy away from going down the more esoteric and supernatural topics covered by journalists like the late Jim Marrs and connecting them to current events.

“I’m just trying to be a voice of reason to help people continue to question and discuss things so we don’t all feel so crazy and alone,” Rose said. “That’s been the main goal of my platform: to let people know, ‘Hey, it’s not just you. I see it, too.’”