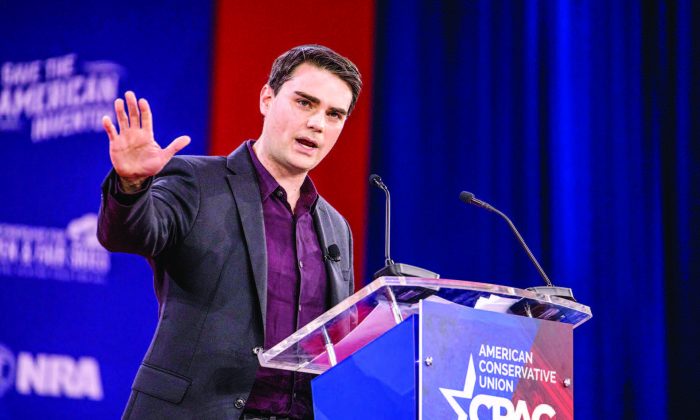 Ben Shapiro, a well-known conservative author and commentator, is invited to give a talk at Boston University (BU) next week. The event has offended some leftist groups who have been trying to pressure the school since last month to cancel the visit.

Sponsored and hosted by the BU chapter of the conservative student political group Young Americans for Freedom (YAF), the Shapiro event is expected to be held on Wednesday, Nov. 15 at the university’s Track & Tennis Center, a facility with a 1,200-person capacity. The scheduled talk, titled: “America Wasn’t Built On Slavery, It Was Built On Freedom,” faced opposition from leftist student groups even before it was confirmed.

“As students and community members of BU, we stand opposed to the proliferation of hate speech,” reads a petition created on Change.org and co-sponsored by nine campus student groups, including: BU College Democrats, BU Students Against Imperialism, BU Young Democratic Socialists, BU Feminist Collective, Hoochie Feminists BU, BU Students for Justice in Palestine, and the Center for Gender, Sexuality, and Activism. It currently has over 2,000 signatures.

According to the Facebook group “BU Students Against Hate Speech,” leftist students have been holding multiple rallies to protest against the visit of whom they called “a racist, homophobic hatemonger” whose remarks “serve to incite people to commit hate crimes.”

In response, YAF denounced the petition as a “shameful attempt to prevent ideological diversity,” calling the protesting students “intolerant” and “hysterical.”

“As we’ve seen on campuses across the country, college students have been subjected to such indoctrination and coddling that they simply cannot handle a viewpoint different from their own, and claim that anything they disagree with is racist, homophobic, or hateful,” the YAF wrote on their website.

The YAF’s invitation of the conservative celebrity came after the BU administration launched a free speech initiative in the wake of a nationwide debate about how colleges and universities handle free speech on their campuses. Robert A. Brown, the BU’s president, established two committees this February to develop a statement on free speech and to renew existing policies and practices that deal with on-campus free expression.

“The basic principle of free speech is that we protect free speech no matter how repulsive or revolting that speech may be, with the underlying principle that it must come with more discussion, more understanding, rather than attempts to quash that speech,” said Jean Morrison, a co-chair of Free Speech Policy Committee, according to BU Today.

Previously an editor-at-large of Breitbart News, Ben Shapiro is now the editor-in-chief of conservative online news site Daily Wire, as well as the host of “Ben Shapiro Show,” a popular podcast that boasts a 15 million monthly downloads.