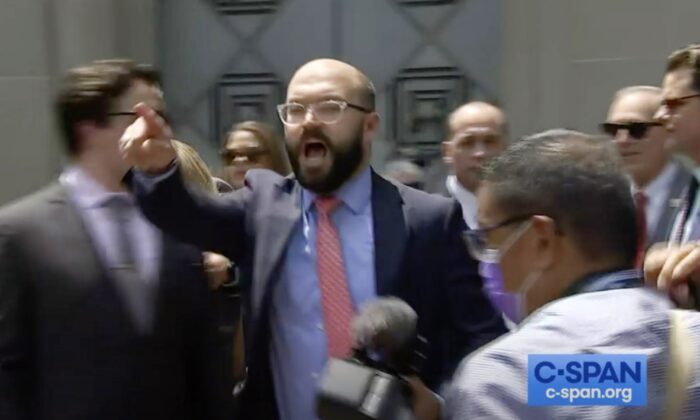 A screenshot from a C-Span video showing the moment Nick Dyer, Rep. Greene’s communications director, announces the press conference held by five GOP lawmakers was over, as protesters swarmed the event, outside the Department of Justice in Washington on July 27, 2021. (Screenshot C-Span/The Epoch Times)
By Ken Silva

A small cadre of Republican lawmakers gathered outside the Department of Justice on Tuesday afternoon to air concerns about the treatment of prisoners arrested for allegedly participating in the Jan. 6 Capitol Hill riots.

“We weren’t even let in the lobby,” Rep. Marjorie Taylor Greene (R-Ga.) said, standing at the DOJ’s doorstep.

They weren’t left alone outside of the lobby, either. After about 15 minutes, a group of what appeared to be leftist protestors swarmed Greene’s podium and the surrounding area.

As Greene was speaking, protestors appeared to be circling behind her and the other Republicans—much to the concern of the staffers and security.

“We have to wrap it up,” a man near Greene could be heard saying, before more urgently repeating, “We have to go. We need to break.”

“The left is interrupting the press conference,” the man then announced to the crowd.

Seconds later, the group of protestors walked through the podium area as the Republican lawmakers and others scattered.

The event was being streamed on YouTube by the Right Side Broadcasting Network (RSBN), with RSBN senior correspondent Liz Willis describing the events as they unfolded in front of her.

“Ladies and gentlemen, what you saw here today again is the intolerant left,” Willis said.

RSBN and Willis were also shut down soon thereafter, with protestors playing horns, drums and other instruments that interrupted the broadcast. Willis said a man repeatedly blew a whistle in her hear throughout the broadcast, despite her repeated requests for him to stop.

Despite the interruption, the Republicans did have about 15 minutes to explain why they were at the DOJ: to demand answers about how the Jan. 6 prisoners have been treated.

According to numerous reports, Jan. 6 inmates have been beaten, held in solitary confinement, and denied access to evidence about their own cases.

The Republican lawmakers said that they have attempted to investigate these reports, but have been stonewalled by the DOJ, as well as the Washington DC Department of Corrections and Capitol Police. A joint letter from Reps Greene, Matt Gaetz (R-Fla.), Louie Gohmert (R-Texas) and Paul Gosar (R-Ariz.) lists six unanswered inquiries Republicans have sent to federal authorities.

“Are we housing political prisoners?” Rep. Louie Gohmert (R-Texas) said at Tuesday’s press conference. “We need to know the answers.”

A former defense attorney and Texas district judge, Gohmert said he’s spent his career fighting for due process for all defendants, including those on death row. During his time as judge, Gohmert said he would make unannounced visits to jails and prisons to make sure the conditions weren’t abusive.

“No matter whom you are in this country, you have the right to a fair trial and the right to see the evidence against you, including all potentially exculpatory or exonerating evidence. A plea agreement should not even be offered until these requirements are met,” Gohmert said.

“These are basic, fundamental requirements of our law that are ingrained in the justice system of these United States. Disregarding these procedures is a violation of any American citizen’s civil rights.”

The lawmakers also have unanswered questions about the security failures of Jan. 6. Acting Capitol Police Chief Pittman has testified that her office was notified in advance that “armed extremists” were targeting the rally, but House Speaker Nancy Pelosi did not call for the National Guard or other reinforcements. Nor were the Republican lawmakers notified of the threat.

The RSBN video was removed from YouTube shortly after Tuesday’s broadcast, but C-Span has video of the event.