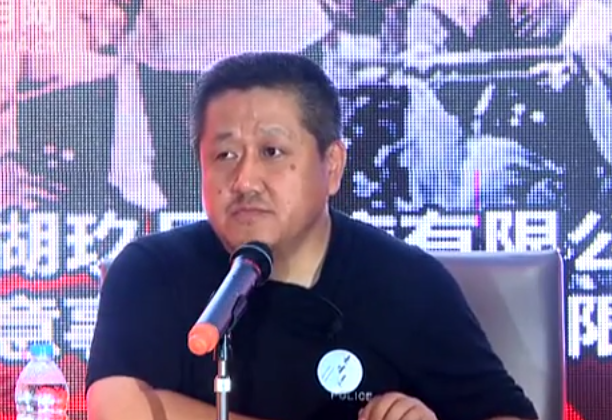 Maoist academic Kong Qingdong's social media account disappeared recently, after he made remarks about Tibet, and acknowledged that a violent crackdown had taken place on June 4, 1989 (Screenshot/m4.cn)
China

The outspoken Maoist academic Kong Qingdong, who took so much pleasure when liberal leaning scholars in China had their speech clamped down upon by the authorities, now himself appears to have been forcibly shut up.

After making a post on Weibo about ethnic unrest in Tibet and the military crackdown on protesters on June 4, 1989, Kong’s account disappeared from Weibo. Given that he was a prolific user of the platform, which functions in a microblog fashion like Twitter, to express his views, other users of the system could only conclude that his account had been deleted.

Kong, a professor at Peking University, is considered a standard bearer for what has come to be called the “Fifty Cent Army,” a general reference to the league of public figures and Internet trolls who harshly denigrate anyone in China who pushes for reforms along the lines of Western democratic polities, and who vociferously support the harshest and most ideological elements of Chinese communist rule.

One of Kong’s most well-known outbursts was in January of 2012, when he called the people of Hong Kong “dogs of British imperialists.” The year prior he called Wan Xiongqiu, a retired professor of of Peking University, an “old rogue,” and said that people with “rightist” political views like him are “traitors” and “America’s running dogs.”

Such expressions were tolerated or even supported until, it appears, recently.

On May 23, Kong attacked former Communist Party leader, Hu Yaobang for his policies in Tibet, in particular his release of Tibetan political prisoners in 1980, which “planted the hidden danger of ethnic and religious turmoil in recent years.” Hu was not referred to by name: Kong’s post merely said “A certain major leader,” though the record showed that Hu was responsible. The post went live on May 22, following the bombing at a marketplace in the Xinjiang Uighur Autonomous Region, described as a terrorist attack by authorities.

Another post by Kong on the same day referred to the Tiananmen Square massacre of June 4, 1989, another sensitive topic for the Communist Party, particularly given that this year marks its 25th anniversary.

Kong, while engaging in an argument with another user who claimed to be among the soldiers that enforced martial law in Beijing on June 4, argued that the massacre did take place.

“The riots must be strictly punished, otherwise the nation will be in chaos, we’ll have border rebellions and foreign intrusions!” the other user said.

Kong responded: “Nonsense. There was no riot at all, it’s you that ruthlessly opened fire and raked the people with bullets, then framed it up. Can you name any college student who did riot?”

The June 4 movement was an anti-corruption, pro-reform set of protests led by Chinese university students beginning in April, 1989. It culminated in the massacre of June 3 and 4, decided by Deng Xiaoping, the de facto top leader at the time. Hundreds and perhaps thousands were killed.

That Kong Qingdong would refer to the military massacre in those terms appears surprising, but it is known that he participated in the movement in 1989 when he was studying at Peking University. Although even in that, Kong is controversial: Former student leader Feng Congde was asked about Kong’s role during an interview with Sound of Hope Radio. “He went against the entire mainstream thinking of the student movement,” Feng said.

Whatever Kong may have meant in reference to the crackdown, his account on Weibo disappeared on May 24. Other users of Weibo remarked that even for a stalwart leftist, a slip up could still be costly. Attempts to contact Kong were unsuccessful.

“How ironic it is! He was reversing black and white on the Internet everyday, but didn’t get in any trouble. This time he finally said something true, but then got eliminated…” Netizen “Guchedan” commented on Weibo.

Other anti-American and pro-Party leftist commentators in China seemed worried about the block on Kong. Sima Nan, who plays a similar role in the public sphere, asked: “Where did Kong Qingdong go? Who blocked the Peking University Kong Qingdong? Why is he blocked? Did he make accusations against the socialist system? …”

Despite their frustration with Kong Qingdong’s views, Chinese Weibo users were unhappy that he had been banned for expressing an opinion.

“I’ve always disagreed with Kong Qingdong’s opinions due to our opposite values, and I’ve had a lot of arguments with him on Weibo, but the Internet should be a platform of free exchange,” said Wang Quanjie, a professor and a member of the National People’s Congress, on Weibo.

Wang added: “The Internet should accommodate all opinions that don’t harm the public, and should protect citizens’ equal rights to speech.”