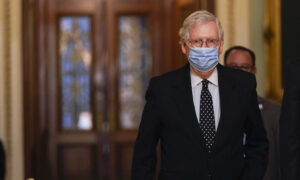 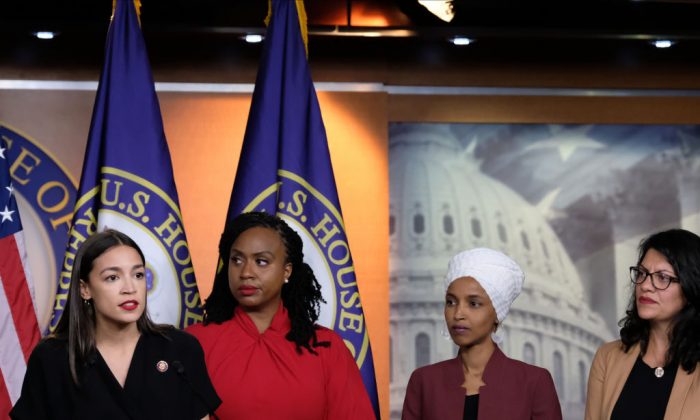 Founders of the progressive PAC Justice Democrats, which helped elect social-democrats like Alexandria Ocasio-Cortez (D-N.Y.), have launched a new progressive PAC, No Excuses, to raise money for candidates to challenge two incumbent Democrats who favor keeping the Senate filibuster and have expressed willingness to work with Republicans.

PAC co-founders Saikat Chakrabarti, Corbin Trent, and Zack Exley are starting a search for community leaders to challenge Democrat Sens. Joe Manchin (D-W.Va.) and Krysten Sinema (D-Ariz.) who are up for reelection in 2024 and standing in the way of Democrats being able to pass progressive policies like the Green New Deal, Medicare for All, and police reform in the Senate.

Democrats now control the White House, the House of Representatives, and potentially the Senate by Vice President Kamala Harris’s tie-breaking vote. Progressives are calling for eliminating the senate filibuster rule that allows minority senators to debate legislation, which would then require 60 votes to end debate and pass legislation.

But far-left Democrats are not expected to be able to find enough Republicans to pass legislation for their progressive agenda with the filibuster still in place.

Both Manchin and Sinema have said they will honor the filibuster, which will make it impossible for Democrats to eliminate the rule, which progressives say is standing in the way of them making the sweeping changes they believe are needed in America.

In an email to supporters on Tuesday, left-wing strategist and former Ocasio-Cortez aide Trent wrote, “Now we are launching a new campaign to replace conservative Democrats in the Senate who stand in the way of progress. It’s called No Excuses, and we need your help immediately to run ads telling Joe Manchin and Krysten Sinema that they will be primaried and replaced in 2024 if they join with Republicans to shrink their own party’s pandemic, climate, and economic plans.”

The email called on their base to help raise funds and nominate grass-roots candidates who will support a progressive agenda in the Senate.

“Over the past few weeks, we have been running ads in both WV and AZ to make sure that the voters know what their Senators are up to. With your donation, we’ll be able to keep those ads running.”

The email continued, “But we need to raise the stakes by recruiting replacements. We’ve learned a lot about how to do this kind of thing over the past few years. We’ve seen how national money and media attention can make it possible to replace even the most powerful Democrats in Congress when they let Americans down.”

Sens. Manchin and Sinema’s offices did not immediately respond to a request by The Epoch Times for comment.

Trent, who worked for Sen. Bernie Sanders’s presidential campaign and has said it is his mission to get more progressives elected to Congress, told supporters on Wednesday that Manchin’s call to work across the aisle with Republicans is a fantasy.

“@JoeManchinWV is at it again. He’s more committed to fantasies of bipartisanship and defending the filibuster than he is fighting for American lives and jobs,” Trent said in his podcast.

Exley said on Twitter in response to a plea against the PAC’s plans that organizations such as No Excuses should pick the next Democrat leaders and not the Democrat Senatorial Campaign Committee.

Besides Ocasio-Cortez, Justice Democrats have recently helped elect Reps. Jamaal Bowman (D-N.Y.) and Cory Bush (D-MO.), a former Black Lives Matter activist, and both of who have called for defunding the police.