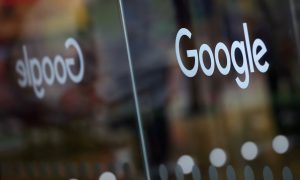 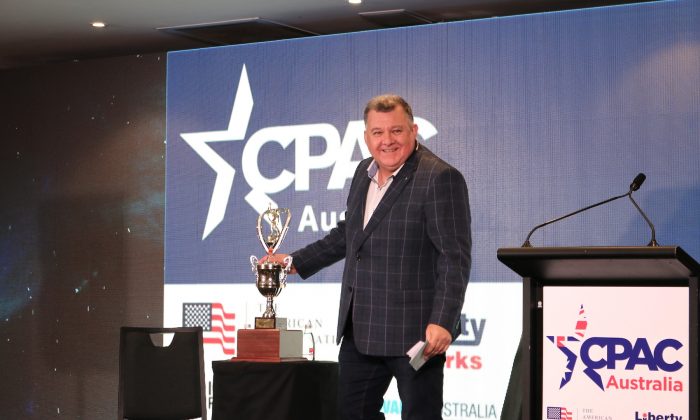 Attendees at a conservative conference in Sydney, CPAC Australia, cheered U.S.-born left-leaning Senator Kristina Keneally for “her brilliant performance” in drawing attention to the event.

The Australian Deputy Leader of the Opposition in the Senate and former NSW premier had earlier publicly criticized the conservative conference and urged that the visa of British activist Raheem Kassam be canceled due to what she calls his “extensive history of vilifying people.”

Several days prior to the event, Keneally had called for multicultural groups to oppose the conference, according to a report by SBS.

Liberal MP Craig Kelly, who addressed the conference on Aug. 10, took to the stage with a trophy.

“This is the CPAC Freedom Award, which goes to the individual who has done the most to promote the CPAC conference,” he told a crowd of about 500 attendees. “Could I have the envelope please?”

Laughter and broad applause followed after Kelly announced, “The winner of the award is the Hon. Senator Kristina Keneally.”

“Would Kristina be here by any chance?”

“Perhaps someone from the Labor Party that might like to collect it on her behalf? The Greens, anyone from the Greens here?” the Liberal MP joked to a laughing crowd.

Someone from the crowd suggested perhaps one of the protesters outside the conference could help collect the trophy.

“We’ll all make sure this gets presented to Kristina in the Senate,” Kelly decided. “In honor of her brilliant performance, we should name this the Keneally Cup to be presented annually every year.”

On the first day of CPAC, former federal Labor leader Mark Latham gave thanks to the “Keneally-Albanese advertising agency.”

“I’d like to recognise our conference sponsors the Keneally-Albanese advertising agency,” he said to laughter.

“Scary ideas, people talking, people putting out points of views, opinions, debate, ideas. I mean, it’s a very scary concept to the Left—that’s why they tried to close [CPAC] down,” he added.

Keneally’s name was mentioned several times over the course of CPAC Australia where she was said to be an example of how those on the regressive Left seek to stamp out opposing views.

On multiple occasions, speakers at the conference acknowledged the importance of freedom of speech and encouraged the audience to continue to engage with those who do not share similar views.

Australian Liberal Senator Amanda Stoker, who spoke at the conference on Aug. 9, told the audience that Keneally “doesn’t know the difference between hate speech and speech that she hates.” In her speech, Stoker talked about improving economic productivity in Australia.

“Neither I or any of us would agree with everybody in this room—we don’t share a common brain, we can all think for ourselves,” Stoker said. “I support our right and everybody’s right to express their ideas, to debate one another, to be creative, to be sometimes right and sometimes wrong. The reason for it is because we are all better because of the process of free speech in action.”

On the second day of the conference, a small group of protesters were holding Antifa and Socialist Alternative flags, and gathered outside the conference venue on Aug. 10 at around noon. For at least 20 minutes, they yelled and shouted slogans.

“Racist, sexist, anti-queer CPAC is not welcome here,” they chanted repeatedly. “Border walls have got to go from Palestine to Mexico … Black, indigenous, Arabs, Asians, and White, unite, unite, unite to fight the right.”

“CPAC, [expletive] off!” they shouted repeatedly near one of the entrances of the hotel that was hosting the conference. They also yelled slogans that slandered U.S. President Donald Trump and former Australian Prime Minister Tony Abbott.

Protest outside venue of #CPACaustralia @CpacAustralia some 20-40ppl. lots of shouting, slogan chanting and name-calling. #CPAC #FreedomOfSpeech a coffee cup was thrown at another person. The speaker was too loud to hear anything substantial. pic.twitter.com/C29CpwUb7v

Outside @RydgesWSquare @CpacAustralia a group of protesters 📢 loudly chanted slogans, flicked off a #MAGA hat of a CPAC attendee.
And a #CPAC attendee had coffee ☕️ thrown at them. Police 👮‍♂️ had to intervene. #FreeSpeech #CPACaustralia pic.twitter.com/Mfe4ldJW71

‘She Has Absolutely No Idea’

Prior to CPAC Australia’s launch, Kristina Keneally on July 30 accused Kassam of having “an extensive history of vilifying people on the grounds of their race, religion, sexuality, and gender.”

“He has described the (Koran), the holy book of the Muslim faith, as ‘fundamentally evil,’” she said. “We should not allow career bigots—a person who spreads hate speech about Muslims, about women and about gay and lesbian people—to enter our country with the express intent of undermining equity and equality.”

Kassam, who is a former Muslim, earlier called Keneally’s comments “defamation” and accused her of hiding behind parliamentary privilege to make such comments.

“I critique radical fundamentalist Islam, I’m not critiquing quiet Muslim families,” he said at CPAC to a crowd of hundreds of attendees. “I grew up in Islam. I spent 20 years in Islam. She has absolutely no idea.”

At CPAC, Kassam told The Epoch Times that he believes in the conservative movement.

“I fly 25 hours across the world for the movement because I believe in sitting here,” he said on Aug. 9. “[The conservative message is] what it means to love your country and how it manifests itself, living that way, and who does better as a result of national conservative governments?”

He reiterated a message he also told the CPAC crowd—that the conservative movement appears to be growing.

“You look all across the world, national conservative governments are on the rise. Hungary, Brazil, India, the United Kingdom, Australia. Here in the United States, it’s increasing.

“It’s growing because people realize what happens when you have a national conservative government. You have high wages, you have controlled migration, you have higher minority employment, you have lower unemployment in general.

“You have a better stock market, stronger family … everything improves and I think people are seeing that and they want that more and more.

“So for me, I’m just a low-level ambassador for that message. I’m delighted to come somewhere like here and talk about that.”