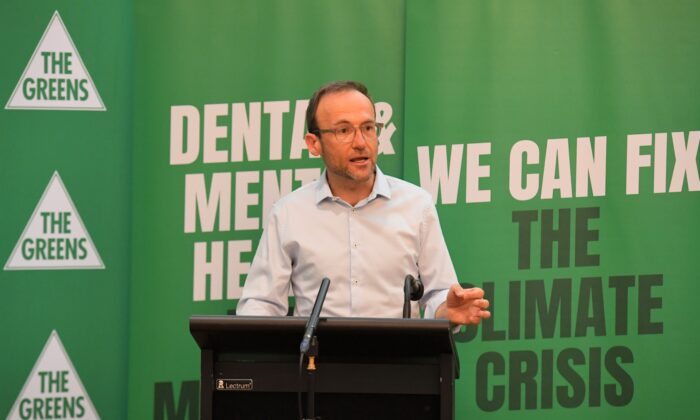 Australia’s Shadow Environment Minister has warned that the left-wing Australian Greens party will push the centre-left Labor government to implement tough environmental laws, which could come at the expense of the economy.

The comment comes as Labor’s Climate Change Bill is set to go before the lower house on Wednesday, with the Greens’ votes needed for the legislation to pass in the federal Upper House.

Climate Change Minister Chris Bowen on Tuesday announced that the 43 percent emission cut represents a floor and not a ceiling, echoing Greens leader Adam Band’s previous comment that whatever target is agreed to for 2030 should only be the minimum standard.

Tasmania Liberal Senator Jonno Duniam, who’s also the Shadow Minister for the Environment, Fisheries and Forestry, said Australia “should be concerned that destructive policies could come into force if the Greens get their way as part of a deal.”

“The government will rely on the Greens to legislate many reforms,” he told The Epoch Times.

“The Greens have made very clear their demands on environmental regulation, including the banning of certain important industries from coal mining to native forestry.”

He further noted that the government “must recognise the positive elements of what is happening in the environment” rather than only focusing on the negativity.

“But, more importantly, [the government] must act in a way that does not needlessly damage the economy and destroy jobs at a time when Australians need certainty more than ever.”

The Greens have campaigned for a 74 percent emissions reduction target by 2030, demanded to stop subsidies to major coal, oil and gas corporations, transition Australia to 100 percent renewables, replace every-coal fired power plant in the nation by 2030, and invest A$25 billion (US$17.4 billion) in rewiring Australia’s grid.

Greens leader Bandt on July 20 said that the party is “in good faith negotiations with the government.” He also urged Labor to “drop its insistence on having a weak target and opening more coal and gas,” adding that “you don’t put the fire out while pouring petrol on it.”

“The State of the Environment report and the Pacific Island leaders give the government all the justification it needs to do more.”

However, Peter Ridd, a former professor at James Cook University and a member of the Global Warming Policy Foundation, argued that the report was “not a scientific document” and excluded a “whole lot of information that contradicts the story that they’re telling.”

For example, while the report claimed that  Australian Great Barrier Reefs were in a declining condition, the latest data showed the reef was, in fact, enjoying “record high coral cover,” Ridd argued.

“They’ll give you a little bit of a bone here. But then they take away the whole thing somewhere else,” he told The Epoch Times on July 20.

“Australia’s environment is much, much better than almost anywhere else on earth.”

The government’s report also called for a “holistic environmental management” to integrate state and territory systems, global action to reduce carbon emissions, and the introduction of national environmental standards.

But Duniam told The Epoch Times such environmental measures must not act as an extended arm of the government.

“As a basic principle, the cost of any administrative or regulatory changes, including data collection, cannot be high nor can any such process be overly bureaucratic.”

In response to Plibersek’s attack on the former government’s environmental response, Duniam defended the centre-right Coalition, saying they have spent over $100 billion on environmental improvements.

“During our time in office, Australia’s emissions were reduced to a level 20 percent lower than they were in 2005 (the baseline for the Paris Agreement),” he said in a press release obtained by The Epoch Times on July 21.

“That was a superior performance to any year under the Rudd and Gillard governments – and left Australia’s emissions over 100 million tonnes lower than they would have been under Labor’s own projections about the proposed impact of its carbon tax.”

The move to enshrine net-zero comes as the Labor government scrambles to deal with skyrocketing electricity and gas prices amid ongoing reluctance from policymakers and business leaders to support coal and gas development due to the climate change movement.

The Epoch Times has reached out to Bandt and Plibersek but didn’t receive a response in time for publication.