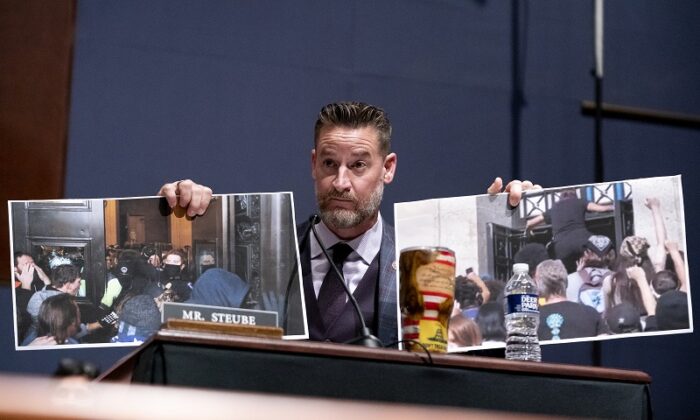 Rep. Greg Steube (R-Fla.) holds a photo from the Jan. 6 attack on the Capitol (L) and the Oct. 14 protest at the Interior Department (R) as he questions U.S. Attorney General Merrick Garland at a House Judiciary Committee hearing at the U.S. Capitol in Washington on Oct. 21, 2021. (Greg Nash-Pool/Getty Images)
US

A violent Oct. 14 brawl at the Department of the Interior headquarters building in the nation’s capital that saw multiple police officers injured and 55 protesters arrested was organized by an anti-fossil fuel group funded by a left-wing dark money group, according to a report made public on Oct. 25.

“Protestors attempted to tear down barricades at the White House, vandalized a statue of Andrew Jackson scrawling ‘Expect Us’ on it in red paint, assaulted police officers while blocking traffic near Capitol Hill, sprayed fake oil on the U.S. Chamber of Commerce building, and attempted to storm the Interior Department,” according to the report by Parker Thayer, a research analyst for the Capital Research Center (CRC).

“The ensuing brawl at an Interior Department doorway led to more than 50 arrests and multiple officers injured. In total, an estimated 400 protestors were arrested during the week of ‘climate chaos.'”

The CRC is a conservative nonprofit that specializes in researching and documenting left-wing funding, organizations, and tactics.

While some familiar environment groups such as Greenpeace were involved in the demonstrations, Thayer said, the organizing and funding were provided far in advance by an obscure group called Build Back Fossil Free (BBFF), which is itself a funded project by a similarly cryptic entity known as the Sustainable Markets Foundation (SMF). That relationship isn’t indicated anywhere on the BBFF website.

The SMF is a tax-exempt 501(c)(3) organization that has no website, according to its most recently available IRS Form 990, and which describes its purpose in the tax document as “to promote environmental protection, energy efficiency, consumer protection, health and safety, and good government.”

None of the officers of SMF receives compensation for their efforts, which are listed on the 990 as requiring no more than one hour of work per week, except for Jay Halfon, who is listed as the director and general counsel, working on average 25 hours a week.

The mysterious nature of SMF is what makes it a powerhouse funding source for left-wing activists such as those associated with BBFF, Thayer told The Epoch Times in an interview on Oct. 25.

“They don’t really disclose much about what they do but it seems like [BBFF] is a project of [SMF], which means we will never really know specifically the billings for that purpose,” explained Thayer, who specializes in nonprofit organization and funding research.

There was also “another group that [BBFF] created, People Vs. Fossil Fuels, so that means they were a project of a project of a foundation that was heavily involved in all these protests, that organized all these demonstrations, along with groups like 350.org and Greenpeace,” he said.

“There are multiple layers of front groups created in trying to hide who the billionaire donors behind all of this really are,” he said. “This is very typical of what left-wing groups around the country do. They create front groups and fiscally sponsored projects like this, it’s becoming one of their favorite tactics.”

As a result, Thayer said, “it’s likely that the whole week these protestors were out there lining up to get arrested and waving signs and chanting, they never really knew who they were working for.”

Attorney General Merrick Garland raised eyebrows last week during his testimony before the House Judiciary Committee when he acknowledged under questioning by Rep. Greg Steube (R-Fla.) that he didn’t know about the Oct. 14 violence.

Noting the direct parallels between the Interior Department “insurrection” and that of Jan. 6 at the U.S. Capitol, Steube told The Epoch Times on Oct. 25 that he believes any group, including private companies such as Patagonia and Ben & Jerry’s, that funds or supports violent actions like the Interior Department demonstrations “should be held fully accountable.”

Steube also said he’s preparing to ask Garland to provide answers to multiple questions about the organizations behind the Oct. 14 violence.