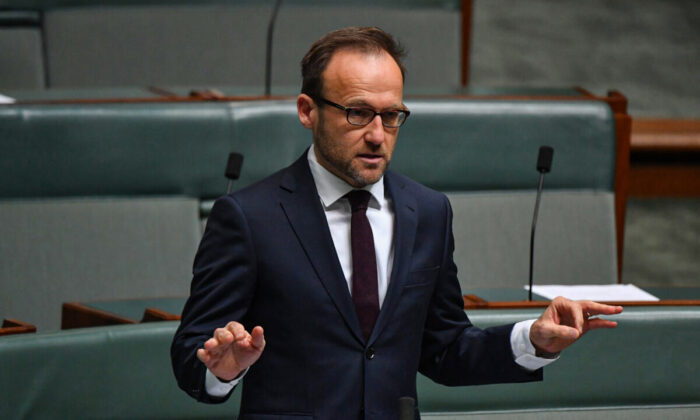 Leader of the left-wing Greens Adam Bandt has been criticised for “virtue-signalling” after he pushed the Australian flag out of the TV camera shot in his press conference.

On Monday afternoon, before Bandt and Deputy Greens leader Mehreen Faruqi arrived at the Commonwealth Parliamentary Offices in the Sydney CBD, a member of the Greens pushed the Australian flag to the side while the Aboriginal and Torress Strait Islander flags remained in the centre.

When asked about the move, Bandt said that the Australian flag was “hurtful” to Australian Aboriginals. He also told the ABC that he usually has it removed before he speaks.

Ahead of a press conference with Greens leader Adam Bandt, a Greens staffer has just moved the Australian flag out of the TV camera shot. #auspol pic.twitter.com/g524GbpKKH

“For many people, this flag represents dispossession and the lingering pains of colonisation,” he said. “Through treaty with First Nations’ people and by moving to a republic, we can have a flag that represents all of us.”

The event has attracted criticism from Northern Territory Senator Jacinta Price, who told The Australian on Tuesday that “it’s becoming a little bit childish for leaders to be virtue-signalling about who loves Aboriginal people more.”

“Are the Greens actually in the Australian Federal Parliament? Seriously? Do they actually hate Australians that much,” Mundine told the Daily Telegraph.

“Aboriginals call themselves Australians all the time.

“The Greens are just a fringe university-type group trying to run down the country.”

The sentiment was echoed by Nationals Senator Matt Canavan who told Sky News First Edition that if the Greens are ashamed of the Commonwealth, “they should not be using taxpayer-funded Commonwealth offices for their press conferences.”

Meanwhile, former Labor senator Stephen Conroy said the move is one of the Greens leader’s tactics to grab attention.

“Here’s a bloke that in his heart believed he would be a minister after the election he truly did believe he would have his hands on the reigns of power and he is just deeply, deeply bitter about it,” he told Sky News Australia on Tuesday.

“Frankly we should just ignore him because he is going to keep having to do these cheap pathetic stunts to try and draw attention to himself.”

Bella d’Abrera, director of the Foundations of Western Civilisation Program at the Institute of Public Affairs said the Australian flag “is a unifying symbol that is a pillar of our history and the Australian way of life.” She added that the removal of the flag was “completely out of touch with real Australians who are proud of their country, and proud of their history”.

“This is exactly the type of empty virtue signalling we have come to expect from the Greens Party,” she told the Daily Telegraph.

The incident comes after the NSW government on Sunday announced that it will install the Aboriginal flag on the Sydney Harbour Bridge permanently which is estimated to cost $25 million.