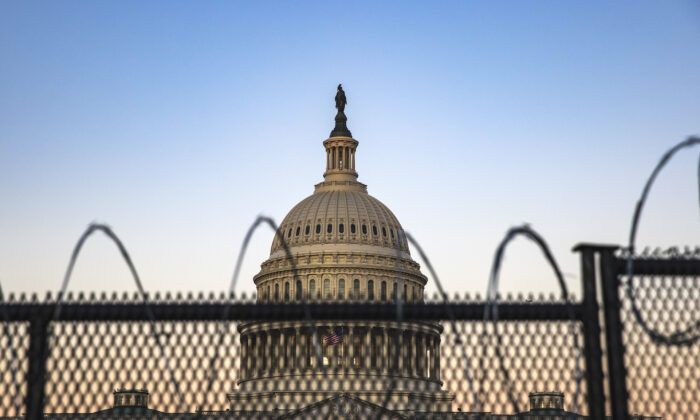 The U.S. Capital is seen as National Guard and U.S. Capitol Police stand guard on Feb. 8, 2021. (Tasos Katopodis/Getty Images)
US

A new internal security program will have an “absolutely chilling effect” on the ability of constituents to petition their representatives, and whistleblowers with vital information to share with Congress, according to Rep. Kelly Armstrong.

“It turns out that knowing who everyone is, and where they are at, has a security benefit. But, my question is, at what costs,” the North Dakota Republican told The Epoch Times in an interview on Feb. 2.

“That has been one of my biggest concerns over the last year, and some time. How we do this stuff in a way that allows people their right to petition their members of Congress. This is not Article II security, it is Article I security, and it has an absolutely chilling effect on people,” Armstrong said.

Article II of the U.S. Constitution established the executive branch of the federal government, which administers laws, as directed by the legislative branch created by Article I.

The First Amendment’s guarantee of the right of every American to “petition the government for a redress of grievances” refers primarily to Congress and its representative functions.

The proposal prompting Armstrong’s comments was put forth January 11 by House Sergeant-at-Arms (SAA) William Walker, who told a House Appropriations Committee subcommittee that he seeks “a Capitol Access Verification Entry System (CAVES) program” to “ensure Members of Congress and the USCP [United States Capitol Police] know exactly who is entering the Capitol Complex, and for how long.

“CAVES would be a security model based on a strict identity verification process. Having a secure ID with the proper electronic devices and software to validate highly secure government identification is an essential starting point for the CAVES system,” Walker said.

Walker also told the subcommittee that he wants an “insider threat awareness program” to train at least one individual on every congressional staff to look for and identify signs among colleagues of “employees who lose their compass” and whose “allegiance has changed.”

Walker’s proposal is part of the response of Congress to the Jan. 6, 2021, attack on the Capitol by angry supporters of former President Donald Trump. The proposal comes amid growing concerns about reports that Capitol Police and other government agencies in both the legislative and executive branches are mounting an intensive intelligence-monitoring effort aimed at accumulating massive amounts of information on every individual entering the Capitol Complex, regardless of their purpose for being there.

Walker was traveling to the West Coast on Feb. 2 and could not be reached for comment. The retired two-star Army General, was appointed as SAA by Speaker of the House Nancy Pelosi (D-Calif.).

“Fundamentally, it comes down to two things,” Armstrong said. “If it was righteous, why are they doing this in secret? And, if it was about security, how come they aren’t coordinating with members’ offices?”

Armstrong’s worries about the Walker proposal are shared by Daniel Schuman, Policy Director for the Demand Progress Education Fund, a progressive advocacy group that focuses on transparency issues in government.

Schuman told The Epoch Times in a Feb. 2 interview that the civil liberties concerns sparked by Walker’s proposal center on what kind of information would be collected, and who would have access to it.

“People need to be able to visit their members of Congress without fear of being surveilled,” Schuman said. “When you start to break apart what the proposal means, what it does is fundamentally impair the operation of the legislative branch.

Schuman said the proposed solution to preventing another Jan. 6 attack does not address the basic problem.

“The fundamental problem is how do you keep the Capitol Complex secure and open. The problem wasn’t in showing your ID on Jan. 6, the problem was the Capitol Hill Police leadership, and those who supervised them were incompetent, that the leadership structure is designed in such a manner as to create the appearance of security without the reality of it,” Schuman said.

He was referring to a congressional review that concluded the USCP lacked basic protective equipment for officers dealing with mobs, had no department-wide operational plan for such a situation, lacked training in dealing with civil disturbances, and was not properly staffed for the day.

A USCP spokesman did not respond to The Epoch Times request for comment by press time.

“Tracking who is in the Capitol Complex isn’t what makes it secure or insecure; it neither solves the problem, nor addresses the problem,” Schuman added. The challenge is in balancing the need for safety with the constitutional right to petition the government, he said.

“If safety is the only value, then you go and put them in a bunker, with each individual in a room, and you put 100 feet of concrete around them, and you put the Marines on top of them,” he said.

“The other main value is that Congress be open. It’s a deliberative body to bring together the views of the 300 million-plus Americans and to work out in a non-violent way of making decisions about what our country is going to do. And that requires everyone to have access, and to have a voice,” Schuman said.