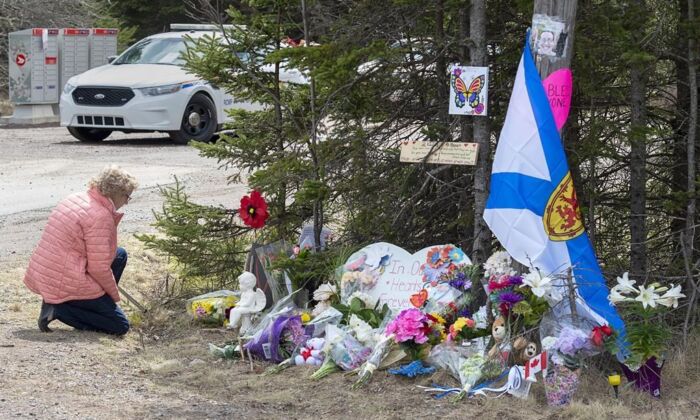 A woman pays her respects to victims of a mass shooting at a roadblock in Portapique, N.S., April 22, 2020. (The Canadian Press/Andrew Vaughan)
Canada

HALIFAX—Nova Scotia Premier Tim Houston says the commissioners leading the inquiry into the 2020 mass shooting that claimed 22 lives in his province are treating the victims’ families with disrespect.

Houston issued a scathing statement Tuesday morning, just hours before the inquiry opened with remarks from the commissioners defending their process and warning against political interference.

“We must never lose sight of the reason for this public inquiry, to seek answers that lead to change and improve public safety,” Houston said in a news release. The premier said he’s heard that family members feel “left in the dark” and have expressed frustration about the structure of the inquiry.

“This is not only disrespectful, it should cause us all to pause and ask, if the families don’t have confidence in the process, how can the public?” the premier said.

Houston is calling on members of the commission to meet with the families and their lawyers to listen to their concerns and provide them with a plan that “gives them confidence” in the process. He said Nova Scotians pushed for an inquiry as opposed to an internal review to ensure it was “honest, comprehensive, detailed and most importantly, designed to answer questions.”

The premier highlighted criticism raised earlier by lawyers who represent 23 individuals and families, noting the inquiry has yet to release a witness list and has been vague about how the proceedings will unfold. “This uncertainty is causing further, unnecessary trauma,” he said.

During their opening statements at the Halifax Convention Centre, the three commissioners said the process has given all parties many opportunities for input as the mass shooting was investigated.

Michael MacDonald, the chief commissioner, said the independence of his inquiry is fundamental and he would never “tolerate any attempt by any institutions or any individual to tamper with our independence.”

He said the inquiry has investigated the facts of the case and compiled them into lengthy “foundational documents” that the parties to the inquiry—including the families’ lawyers—have had a chance to review and comment on.

He said if the inquiry had instead had all witnesses come forward and be subject to cross-examination by representatives of the 61 participants, it would have led to “potential re-traumatization for the hundreds of witnesses,” and might have caused the inquiry to drag on for five years.

He also said that where a fact is unclear in the documents, and if a witness might be able to provide more information, the commission will bring them to the inquiry and ask them questions, and lawyers representing participants will be able to cross-examine them.

MacDonald said lawyers may recommend witnesses be brought forward but added that the commissioners will consider the “restorative” mandate of the commission in deciding whether to compel a witness to testify.

“We expect that many witnesses who will come before us will be hurting, even broken. This has to be factored in determining when and how a witness will be questioned,” he said.

He noted that the commission has the “mammoth task” of analyzing 17 crime scenes from the rampage and over 40,000 pages of documents.

Commissioner Leanne Fitch, a former Fredericton police chief, said while the commission “may” allow lawyers for participants to question witnesses, it is crucial the commissioners themselves retain control of the process.

“While we always listen with respect and a collaborative spirit, we will not be directed by participants or any other group, and we are creating many opportunities for you to take part,” she said.

Before any evidence is presented, there will be a panel discussion on mental health and wellness, which will acknowledge how the multiple murders on April 18-19, 2020 had a painful ripple effect across Canada.