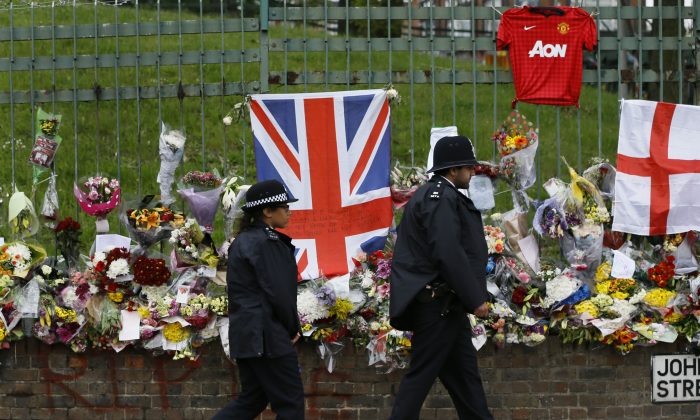 British police officers walk past some of the thousands of tributes left in honour of murdered 25-year-old British soldier Lee Rigby, near Woolwich Barracks in London, Wednesday, May 29, 2013. An autopsy shows that an off-duty soldier killed in a suspected Islamic extremist in London attack last week died from multiple cuts and stab wounds after he was hit by a car, police said Wednesday. (AP Photo/Lefteris Pitarakis)
UK

U.K. Members of Parliament are investigating claims by Kenyan officials that Lee Rigby killer Michael Adebolajo was sprung free from a jail in the country.

According to the Daily Mail, senior Kenyan officials told MPs that they wanted to imprison Adebolajo when he was caught trying to get involved with an Islamist group.

The officials, however, claimed that Britain’s intelligence agency MI5 got involved and set him free. They said he was then allowed to return to the U.K., where he killed Rigby near an Army barracks in Woolwich.

“The Home Affairs Committee visited Kenya, where Adebolajo was arrested in 2010, reportedly as part of a group who were trying to enter Somalia to train with Islamist militant group al-Shabab,“ Vaz wrote. ‘We heard competing accounts from British and Kenyan sources about the circumstances under which Adebolajo was returned to the UK.”

According to the Telegraph newspaper, Rigby’s mother called for a Woolwich memorial.

“I don’t want him to be forgotten,” she told the paper. “I think a plaque or some fitting tribute for where Lee died.”

She told the Halifax Courier that the killers will never be forgiven.

“I know that they won’t get out now,” she said. “They cannot do this to another family.”

“It’s hard to get up in the mornings, just to put one foot in front of the other,” she said. “I just really wanted to look in their eyes and see if they showed any remorse. I got nothing,” Rigby added.

“There were a couple of times I couldn’t go. They talked about Lee’s injuries in very raw details and I couldn’t sit through that,” she said.