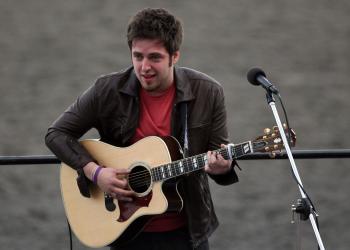 By Carl Dunbar
Print
After a star-studded, two-hour-long production, former paint salesman Lee DeWyze edged out co-finalist Crystal Bowersox to earn the fan-voted title of American Idol. As America’s number one rated show for many years, there was no shortage of drama or celebrity musical numbers to highlight the season’s finale.

While the crowning moment for DeWyze and Cowell’s departure provided the show’s drama, it was also a great night of musical pairings. Each finalist performed memorable numbers with rock icons. For Bowersox, it was a duet with Alanis Morissette on the song “You Ought to Know.” DeWyze then did a medley of hits with the group Chicago, blending in as if just another member of the band. The two also sang together on “With a Little Help From My Friends,” and were then joined by a somewhat bewildered songwriter, Joe Cocker.

Perhaps stealing the thunder from the top two was third place finisher Casey James. The blonde haired rocker and guitar soloist walked on stage with an electric guitar slung on his back and strumming a second acoustic guitar to Poison’s “Every Rose Has Its Thorn.” He then shed the acoustic and out walked Bret Michaels of rock band Poison, to join James on the number.

The song held special significance as Michaels had suffered a warning stroke just last week and then won Donald Trump’s reality show “Celebrity Apprentice” on Sunday. Michaels participated in the contest to raise money and awareness for a Diabetes charity. The duet was a among the night’s single best moments, as James played a scorching lead guitar, clearly elated to be playing along with Michaels.

The night saw many musical icons grace the stage, including Alice Cooper, the Bee Gees, Janet Jackson, Christina Aguilera, Daryl Hall and John Oates of duo Hall and Oates, all of season nine’s top twelve finalists, and all of the previous eight American Idols. The show was well-produced, briskly bouncing between back-story on finalists DeWyze and Bowersox, encapsulation and tribute to Cowell’s time on “Idol,” and plenty of musical numbers.

Despite all the staging and pageantry, the two-plus hours built to the final moment when host Ryan Seacrest prepared to name the winner. Upon hearing the announcement, DeWyze was barely able to compose himself, clearly overwhelmed. He finished out the show by singing U2’s “Beautiful Day,” getting embraces from his “Idol” friends and family.