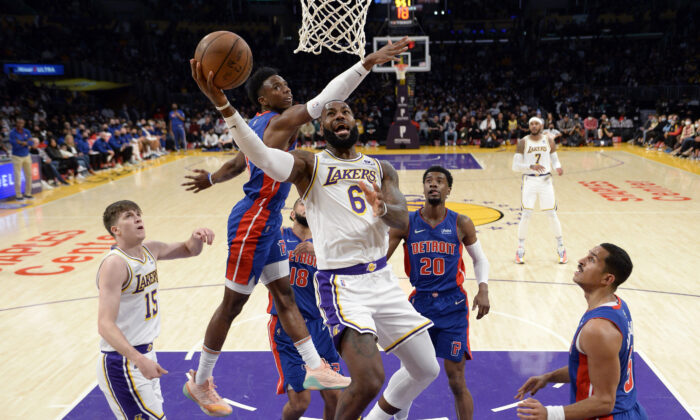 LeBron James #6 of the Los Angeles Lakers drives to the basket ahead of Hamidou Diallo #6 of the Detroit Pistons during the first half at Staples Center in Los Angeles, on Nov. 28, 2021. (Kevork Djansezian/Getty Images)
NBA

Russell Westbrook had 25 points and nine assists and Anthony Davis contributed 24 points and 10 rebounds as the Lakers won for just the third time in the past eight games.

The contest was a rematch of the game in Detroit seven days earlier when James and Detroit’s Isaiah Stewart was involved in a wild fracas that saw James suspended for one game and Stewart for two contests. There were no incidents this time.

Last week in Detroit, the episode began when James struck Stewart in the face with his left fist as the two battled for positioning at the free-throw line. An enraged Stewart attempted to get at James multiple times despite blood flowing out of a huge gash on his face.

Stewart had five points and six rebounds in 27 minutes on Sunday night.

Talen Horton-Tucker added 12 points for the Lakers, who made 50 percent of their field-goal attempts, including 9 of 32 from 3-point range.

Earlier, Grant’s dunk tied the score at 56 with 9:12 left in the third quarter before the Lakers made seven straight shots during a 16–0 burst.

James scored seven points during the run, which was completed by Davis’ dunk with 5:24 left in the period.

Horton-Tucker drained a 3-pointer to increase the advantage to 77–58 with 3:43 remaining but Detroit narrowed its deficit to 83–70 entering the final stanza.

The Pistons made a spirited run and pulled within 99–93 on Jackson’s basket with 4:38 left.