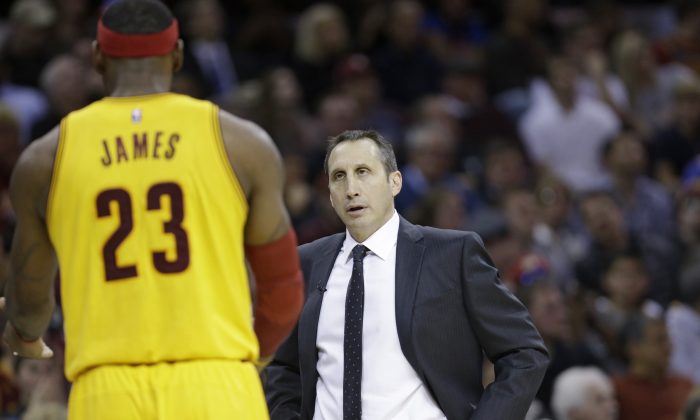 LeBron James may opt out of his contract after this season, according to the latest rumors about the Cleveland Cavaliers star.

James returned to Cleveland on a two-year deal with a player option, meaning he can choose to opt in and stay with the Cavs for sure next season, or opt out and seek another deal.

But with the Cavs struggling and only in fifth in the Eastern Conference with an 18-12 record and some rough losses to some of the worst teams in the league, speculation is increasing that James will opt out of his deal and may ultimately leave the Cavs for another team.

“James, who turns 30 today, has no intention of compromising his prime years playing for a sputtering organization,” reported Chris Haynes of Cleveland.com. “Given the massive scrutiny he would endure if he departed Cleveland a second time, if his hand is forced, I’m told he won’t hesitate to make the appropriate business decision if it means bolting.”

The Cavs have put together some nice games this season but have struggled defensively pretty much all year, with a lack of rim protectors and, overall, players who are known for being better offensively than defensively.

James and other players are also rumored to not be connecting well with first-year head coach David Blatt, who is transitioning into the NBA after years in Europe and Israel.

“Sources told ESPN.com that there is rising concern in team circles about the level of response that Blatt is getting on the floor, with Blatt himself acknowledging that the Cavaliers ‘lost our energy and we lost our competitiveness’ in Sunday night’s embarrassing home loss to Detroit,” reported the outlet.

“The Cavs’ effort level, especially defensively, is eroding noticeably, raising the volume of questions about just how much the locker room is listening to the 55-year-old Boston native, who has enjoyed tremendous international success but began this season as a relative unknown to NBA players.”

But James told reporters recently that Blatt has his attention, as well as the other players.

Blatt also denied that he doesn’t have the team’s attention.