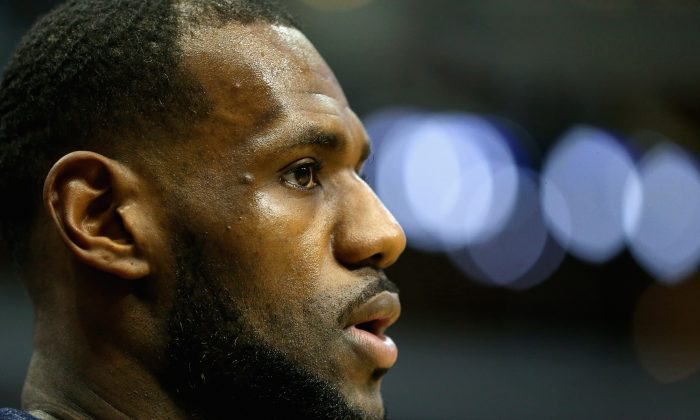 LeBron James of the Cleveland Cavaliers before a game against the Dallas Mavericks at American Airlines Center on March 10, 2015 in Dallas, Texas. (Photo by Ronald Martinez/Getty Images)
NBA

LeBron James: ‘I would love to get some more rest’

LeBron James says he might take some more games off as the NBA’s regular season winds down and the playoffs loom.

James has garnered criticism for already taking two weeks off earlier in the season despite not having a specific injury.

“It’s game by game right now,” James said on Tuesday, reported the Beacon Journal. “I would love to get some more rest, especially going into the playoffs and knowing how important those games are, and how physically taxing those games can be, mentally as well, so we’ll see what happens.”

James has in past seasons sat for the last couple games before the playoffs, but this season the Cavs have a good chance of securing the second seed in the Eastern Conference. Cleveland is currently 1.5 games ahead of the Chicago Bulls and 2 games ahead of the Toronto Raptors, both of which have slumped recently.

James said homecourt advantage doesn’t matter too much, though, and didn’t seem concerned about potential matchups. If the playoffs started with current standings the Cavs would face the Indiana Pacers, James’ longtime playoff rivals when he was with the Heat. If the Cavs fall to third or fourth they could face the Milwaukee Bucks or Washington Wizards.

“The only thing it guarantees is the first two games on your home floor. That’s it,” James said. “You still have to go out and win on the road. We need to have that mentality and understanding of how important home is for sure. I think we’ve done a great job of establishing home, but we have to win on the road as well.”

James is averaging 36.2 minutes this season in the 55 games he has played, one of the highest marks in the league. But the 11 games he’s missed this season is the most in any season of his career.

Cavs coach David Blatt said that April is a chance to rest some players before the playoffs, including James.

“In April the schedule gets much lighter for us in terms of the number of games in a short period of time,” Blatt said. “We’ll have more rest days and more practice days and we’ll have more opportunity to give guys a chance to recover.”