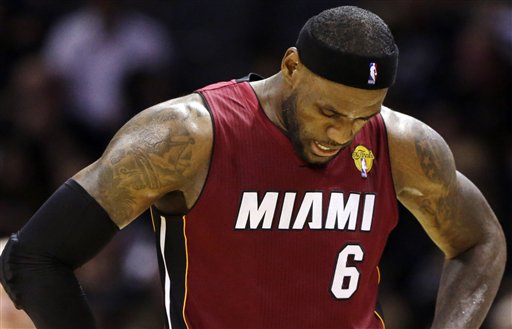 Miami Heat forward LeBron James (6) heads down court between plays against the San Antonio Spurs during the first half in Game 1 of the NBA basketball finals on Thursday, June 5, 2014, in San Antonio. (AP Photo/Eric Gay)
NBA

He appeared to suffer cramps stemming from the heat inside the AT&T Center in San Antonio.

The Spurs said in a statement that an electrical power failure left the air conditioning system off.

An announcer on ABC, which is airing the game, said that she has a thermometer and that it’s above 90 degrees Fahrenheit near the court.

Several other players appear to be affected by the heat, but none as intensely as James. He left the game with about four minutes left.

James stayed on the bench through the end of the game.

The Spurs ended up winning 110-95, but really only pulled away in the final minutes.

James will likely be ready to play in game 2. The Spurs have two days to fix the air conditioning, as the game isn’t until Sunday night.

Games 3 and 4, slated for next Tuesday and Thursday, will shift to American Airlines Arena in Miami.

The Spurs have outscored the Heat 21-9 since the first time LeBron James checked out in the 4th quarter. #MIAvsSA http://t.co/Zky97Fo6IW

SAN ANTONIO—Heat was the story in Game 1 of the NBA Finals.

Not the Miami Heat, so much, as literal heat.

With temperatures measured in the mid-80s inside the arena, Game 1 of the title series between Miami and the San Antonio Spurs was a sweltering struggle. Players tried to cool by placing icebags on their necks while resting on the bench, and just about everyone in the sellout crowd was using something to fan themselves.

It’s not the first time electricity has had a significant impact on a championship event in recent years. The Super Bowl in 2013 between Baltimore and San Francisco was marred by a power outage at the Superdome in New Orleans, interrupting play for 34 minutes.

Power was the culprit in Game 1 of the finals as well, arena officials said.

“An electrical failure for the power that runs the AC system in the AT&T Center has occurred,” Spurs Sports and Entertainment said in a statement distributed in the second half. “We are continuing to work on resolving the problem. We apologize for any inconvenience.”

Many fans removed the giveaway black T-shirts handed out before the game, obviously wanting to wear as few layers inside the steamy building as possible. Heat star LeBron James was clearly laboring in the second half.

“They’re trying to smoke us out of here,” he told teammates during one stoppage in play.

Neither team was scheduled to practice at the arena on Friday or Saturday because of a previously scheduled concert. Game 2 is Sunday night in San Antonio.