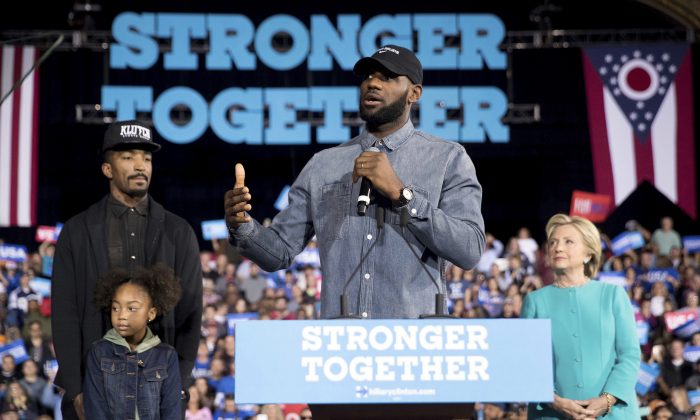 CLEVELAND—Hillary Clinton is pulling out the big guns for her final swing through the crucial battleground state of Ohio. Or at least the very, very tall ones.

Basketball great LeBron James joined Clinton at a campaign event in Cleveland on Sunday, dwarfing the Democratic candidate as he pushed Ohioans to support her at the polls.

As a child growing up in inner-city Akron, the NBA star (height: 6’8″) said he believed “our vote doesn’t matter.”

“But it really does,” he said.

LeBron James campaigns for Hillary Clinton: Our vote matters, “it really, really does.” We have to get out and vote https://t.co/JVtekml65L

Standing beside—and somewhat below—James, Clinton praised his work on the basketball court and for improving the lives of children through his family foundation.

“What he does off the court is to care for every child as though that child is his own,” she said.

Clinton added: “I will be on your side. I will fight for you.”

Though she’s spent most of her campaign running as President Barack Obama’s successor, vowing to continue the first black president’s legacy, Clinton has struggled to motivate black voters. In early voting, they’ve turned out in lower numbers than the record black turnout in 2008 and 2012 that helped fuel his historic candidacy. The slump could hurt her in swing states, like Ohio and Pennsylvania, where urban, black turnout is crucial for Democrats.

On Sunday morning, Clinton stopped by an African-American church in solidly Democratic northwest Philadelphia to warn parishioners that “everything” they care about is on the ballot.

“This election is about doing everything we can to stop a movement to destroy President Obama’s legacy,” she told voters at Mount Airy Church of God in Christ.

But her team feels particularly concerned about Ohio, where polls show her in a dead heat with her Republican rival, Donald Trump. On Friday, she appeared at a free concert featuring rapper Jay Z and his wife, Beyonce Carter Knowles, in Cleveland.

LeBron, who helped end Cleveland’s championship drought earlier this summer by winning a title with the Cavaliers, endorsed Clinton last month in an op-ed article, where he argued she would be a champion for children and improve life for African-Americans. A father of three, James said he returned to Ohio from the Miami Heat in 2014 with two missions: to win a championship and help area children.

“Only one person running truly understands the struggles of an Akron child born into poverty,” wrote James, who grew up poor in that city and has started a foundation to improve educational outcomes for at-risk children in his hometown.