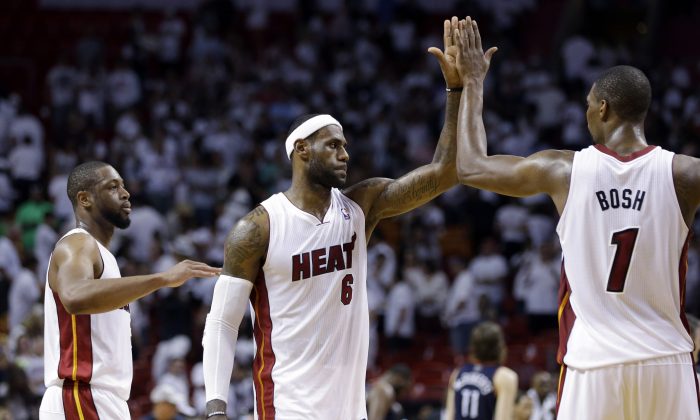 FILE - In this April 23, 2014 file photo, Miami Heat's LeBron James (6) high-fives Chris Bosh (1) after the Heat defeated the Charlotte Bobcats 101-97 in Game 2 of an opening-round NBA basketball playoff series in Miami. At left is Dwyane Wade. A person familiar with the situation tells The Associated Press that James has decided to opt out of the final two years of his contract with the Heat and become a free agent on July 1. Opting out does not mean James has decided to leave the Heat, said the person, who spoke on condition of anonymity because neither the four-time NBA MVP nor the team had made any public announcement. (AP Photo/Lynne Sladky, File)
Social Media

An article posted to The Onion saying LeBron James will join terrorist organization al-Qaeda is just satire but it appears a number of people believed it.

The Onion is the preeminent satire news organization in the US. None of the stories on the site are real.

“After viewing its latest pitch highlighting all he could accomplish with its organization, NBA power forward LeBron James confirmed Tuesday that he is currently leaning toward joining the militant Islamic group Al-Qaeda,” it reads, adding: “While he has also considered offers from terrorist organizations such as Boko Haram and the Taliban, he believes heading to Al-Qaeda remains his best opportunity to defeat the West in the immediate future.

A disclaimer for the Onion explains what it’s trying to do.

“The Onion is a satirical weekly publication published 52 times a year on Thursdays,” it reads, adding: “The Onion uses invented names in all its stories, except in cases where public figures are being satirized. Any other use of real names is accidental and coincidental.”

But on social media sites, people appeared to believe the LeBron story.

“I hope this is a joke,” one person wrote.

Said another, “Not sure anyone should be joking like this, someone may take it seriously. there are people who believe everything they read.”