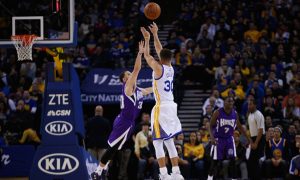 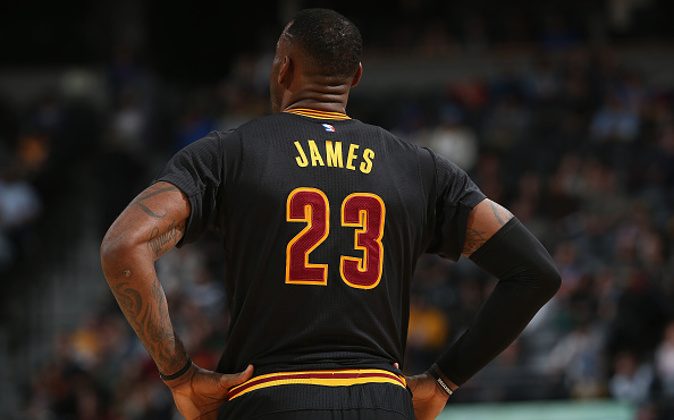 Detail of the jersey of LeBron James #23 of the Cleveland Cavaliers as he takes the court against the Denver Nuggets at Pepsi Center in Denver, Colo., on Dec. 29, 2015. (Doug Pensinger/Getty Images)
NBA

Lebron James 17th On All-Time Scoring List; When Do We Expect Him to Break the Top Ten?

On Monday, Lebron James passed former Nuggets star Alex English for #17th on the NBA’s all time scoring list after scoring 14 points in a 101-97 victory over the Phoenix Suns.

After another 34 point effort last night, Lebron is now at 25,657 career points. So how long can we expect it to take for Lebron to catch the guys next up on the list?

As you see, #16, #15, and #14 are all active players, with all three players being past their primes. Tim Duncan is currently averaging 9.0 points a game in a bench row with the Spurs; Paul Pierce is averaging 4.7 points in a similar role with the Clippers, and Garnett is averaging 3.3 points in a mentor role for the Timberwolves. So to calculate when Lebron will catch these guys, we simply take the number of points needed and divide it by the difference between Lebron’s current scoring average—25.7 points, and the player’s current scoring average.

Looking further ahead, #10 is Hakeem Olajuwon at 26,946 points, a gap that Lebron will close in 50 games at his current pace. So basically, by years end, expect Lebron to be top 10 all time in scoring—that’s where moving up the ranks then gets tough.