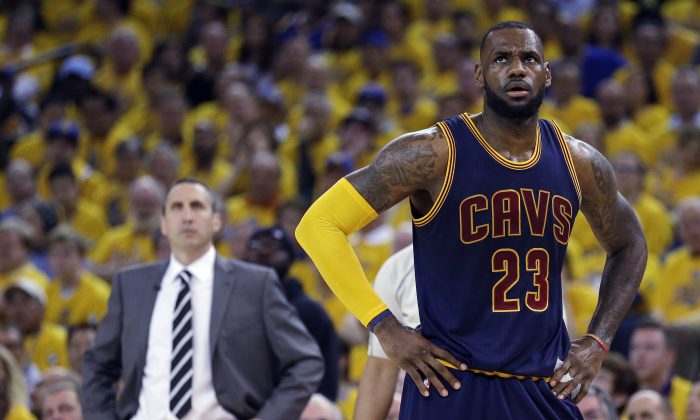 Cleveland Cavaliers forward LeBron James stands on the court near coach David Blatt during Game 2 of basketball's NBA Finals against the Golden State Warriors in Oakland, Calif., on June 7, 2015. James’ calculating image wasn’t helped when the Cavaliers stunningly fired Blatt on Friday, Jan. 22, despite Blatt leading the team to the NBA Finals last season and an Eastern Conference-best 30-11 record this season. James has played for three coaches during his two stints in Cleveland. (AP Photo/Ben Margot)
NBA

He’s won two NBA titles, a pair of Olympic gold medals, four MVP awards, universal respect of his peers and the adulation of millions of basketball fans worldwide. At 31, and at the peak of his career, James has earned it all.

And, something else—a reputation as a coach killer.

James’ calculating image wasn’t helped when the Cavaliers stunningly fired David Blatt on Friday, despite Blatt leading the team to the NBA Finals last season and an Eastern Conference-best 30-11 record this season. James has played for three coaches during his two stints in Cleveland, with Tyronn Lue, the team’s top assistant promoted by general manager David Griffin to take over his talented squad, the fourth Cavs coach to work with No. 23.

Unlike his predecessors, Lue is already on solid footing with James, who respects the 38-year-old former point guard.

Blatt, on the other hand, seemed doomed from the start.

It was no secret that James and Blatt weren’t always in sync. Their relationship was analyzed from the moment James decided to leave Miami and return to Cleveland. Blatt was plucked from Europe last year by owner Dan Gilbert, who hoped James and Blatt would grow together when in fact they were a bad match from the outset.

James referred to his coach as simply “Blatt” during much of last season, and any interaction between the two seemed forced and insincere. During timeouts, James often spoke to Lue without making eye contact with Blatt.

There was the moment in Phoenix when James put his hands on Blatt and re-directed him off the floor. And, of course, James famously said he changed a play Blatt drew up during the closing seconds of a playoff game with Chicago before hitting a buzzer-beating jumper.

Blatt learned that coaching one of the planet’s best players has its drawbacks.

“He had the most scrutinized job that you could possibly have,” Clippers coach Doc Rivers said. “I think the reward for coaching LeBron is you get scrutinized. It really is, it’s hard. They have a great record, the best in the East, and you get fired for it.”

Lebron James 17th On All-Time Scoring List; When Do We Expect Him to Break the Top Ten?

Shortly after Blatt’s firing became known, Twitter and other the social media platforms buzzed with opinions about James’ role in Cleveland’s coaching shake-up.

Griffin was quick to defend James, saying any notion the 12-time All-Star pulled the strings was wrong.

“LeBron doesn’t run this organization,” Griffin said. “LeBron is about this organization. This narrative that somehow we’re taking direction from him, it’s just not fair. It’s not fair to him, in particular, but frankly, it’s kind of not fair to me and our group anymore. I know what something that’s not right looks like.”

A source close to James told the Associated Press that the star didn’t have any inkling that Blatt would be fired until he and his teammates met with Griffin, who said he made the move because he sensed this title-chasing team was disconnected.

“There’s a lack of spirit and connectedness that I just couldn’t accept,” Griffin said. “And frankly, halfway through the season, I think we have the time to right the ship.

“I know that sounds crazy when we’re sitting with a 30-11 record. I understand that. But we were 30-11 with a schedule that was reasonably easy. And I’m judging a lot more than wins and losses.”

“I’m embarrassed for our league that something like this could happen,” Carlisle said. “It’s just bizarre. It just leaves you with a bit of an empty feeling. Because Blatt’s a great guy and he did a great job there.”

Coincidentally, Blatt was fired the same day Golden State coach Steve Kerr, his counterpart in last season’s Finals, returned to the Warriors after a long leave of absence following complications from two back surgeries. Before he was hired by Cleveland, Blatt interviewed to be on Kerr’s staff.

Kerr was disappointed by Blatt’s ouster.

“It’s a tough business when you go 30-11 and you get fired, you get to the Finals the year before,” Kerr said. “It’s a shame. But it’s a different organization. They have to do what they’re going to do. He’ll land on his feet. He’s a great coach. He’ll have plenty of success ahead of him.”

And James behind him.