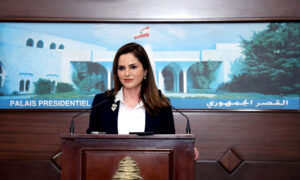 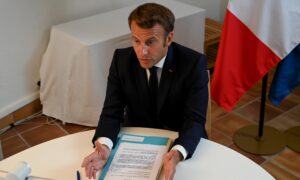 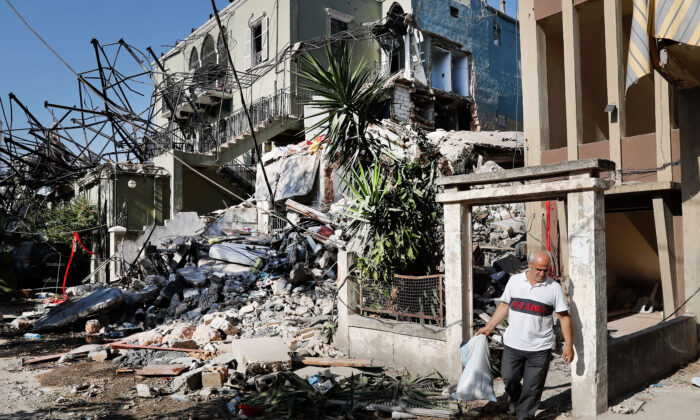 A Lebanese man carries his belongings as he leaves his destroyed house near the scene where an explosion hit on Tuesday the seaport of Beirut, Lebanon on Aug. 6, 2020. (AP Photo/Hussein Malla)
Middle East

BEIRUT—Lebanese President Michel Aoun said the probe into this month’s devastating blast in Beirut is “very complex” and won’t be finished quickly.

Responding to calls that he step down, Aoun told French TV station BFMTV that would be “impossible,” because it would create a power vacuum. The interview, his first with foreign media since the Aug. 4 blast, aired late on Aug. 15.

The cause of the fire that ignited nearly 3,000 tons of ammonium nitrate stored at Beirut’s port remains unclear. Documents have emerged showing that the country’s top leadership, including Aoun, and security officials were aware of the chemicals that had been stored there for years.

The blast killed 180 people and wounded more than 6,000; at least 30 people are still missing.

Aoun said the probe is divided into three parts. The first aims to determine the circumstances surrounding the cargo, the second where it came from and who shipped it, and the third to find who was responsible for handling and securing it.

“We had the determination to reach conclusions quickly, but we found out that the issues are very complex and require time,” said Aoun.

When asked about what measures he took when he learned of the explosives in July, Aoun said the information came to him “very late,” but his military adviser was reassured that those with direct responsibility were handling the matter.

“They all were informed,” Aoun said, adding that he made sure those who could take measures to secure the area were in the loop.

Aoun said FBI and French investigators are helping because “they, more than us, have the capability and ability to find out the details of what got the ship here, what is the source and who owns it.”

A nine-member team of FBI investigators arrived in Beirut on Aug. 16, according to a Lebanese aviation official.

Aoun, who is backed by the powerful Hezbollah militia, asked for satellite images to determine if there was an air raid, saying he hasn’t ruled out the possibility of a foreign missile attack.

Hezbollah leader Hassan Nasrallah has denied his group had any role in the explosion and said any international probe would likely seek to clear Israel of responsibility in the port explosion, if it had a hand.

Israel has denied involvement and, so far, no evidence has emerged to suggest otherwise.

Many Lebanese want the probe taken out of the hands of their government, fearing that bickering among the long-entrenched political factions, notorious for corruption, won’t allow any results to come to light that are damaging to their leadership.

Popular anger has swelled over the ruling elite’s corruption, mismanagement, and political uncertainty. Under pressure, Lebanon’s government, also backed by Hezbollah and allies, resigned Aug. 10. For now, there are no formal consultations underway on who will replace Hassan Diab as prime minister and no likely candidate has emerged.

Asked about the public anger, Aoun said he shares the rage.

But Aoun said the moment isn’t right for presidential elections.

“The political and popular atmosphere can’t take new elections before restoring calm,” he said. “They would be emotional, and not a true representation of the people.”

Aoun was elected in 2016, breaking more than two years of deadlock in Lebanon, which remained without a president.

In light of last week’s deal establishing full diplomatic relations between the Israel and United Arab Emirates, Aoun didn’t rule out that Lebanon may one day make peace with Israel as well, once its unresolved issues were solved.

Asked if Lebanon too would reach a peace deal, he replied: “It depends.”

“We have problems with Israel that we need to solve first,” Aoun said.

Lebanon and Israel are technically still at war, and Hezbollah has engaged in occasional clashes along the border. Hezbollah and Israel last engaged in a full-fledged conflict in a 50-day war in the summer of 2006.

The UAE and Israel opened diplomatic ties as part of a deal brokered by the U.S. that required Israel to halt its contentious plan to annex West Bank land sought by the Palestinians for a future state.