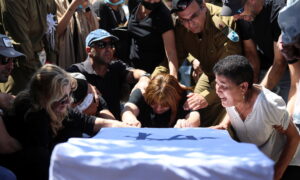 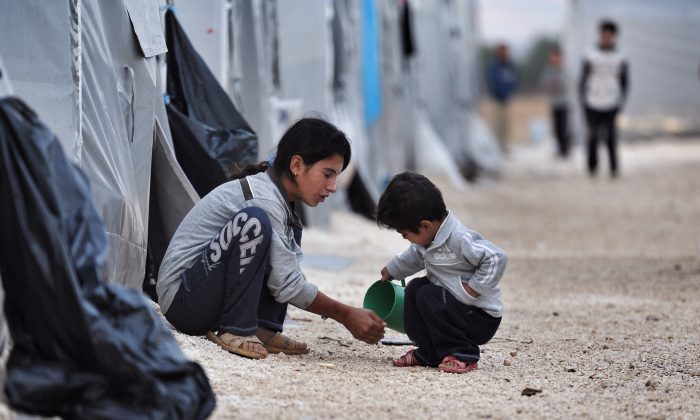 A Kurdish refugee boy from the Syrian town of Kobani helps his sister to wash her face in front of a family tent in a camp on Oct. 23, 2014, in southeastern town of Suruc, Sanliurfa province. The Syrian town of Kobani has yet again seen fierce fighting between Islamic State and Syrian Kurdish forces. Kurdish authorities have agreed to send Peshmerga fighters to the Northern Syrian town to fight ISIL after Turkey has allowed passage. (Kutluhan Cucel/Getty Images)
Middle East

BEIRUT—Lebanon announced on Thursday it will not accept any more refugees from neighboring war-torn Syria, except in what authorities deem to be “exceptional” cases — a move that could prevent tens of thousands of Syrians from escaping the civil war.

The tiny Mediterranean country has 1.1 million officially registered Syrian refugees, although the number is believed to be far higher. They make up almost a quarter of the country’s population of 5 million.

The refugees have stretched the country’s already fragile infrastructure and compete withLebanon’s poorest for low-paid jobs, causing tensions. Tens of thousands of Syrian children are out of school because there is nowhere to place them.

The Syrian refugees already in Lebanon would be encouraged to leave, said Jreij.

The government would “encourage the displaced Syrians … to return to their countries, or go to other countries, by all means,” he said.

Ninette Kelley, the U.N. refugee agency’s representative in Lebanon, said the country had begun restricting the entry of Syrians since August.

As a result, she said the UNHCR was receiving 75 percent to 90 percent less people seekingrefugee status.

There are over 3 million Syrian refugees from the war, mostly in neighboring countries. Another 6 million have been displaced within Syria, making it one of the world’s worst humanitarian crises.

European countries and the U.S. have been extremely reluctant to accept Syrian refugees, leaving the burden to countries neighboring Syria — Lebanon, Turkey, Jordan and Iraq, which are ill-equipped to deal with the floods of people.