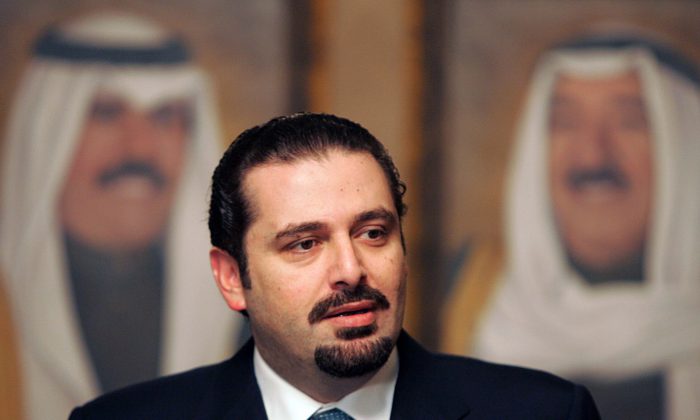 Lebanese politician Saad al-Hariri speaks during a press conference at Kuwait international airport in Kuwait City on May 4, 2008. Hariri recently resigned as Lebanon’s prime minister, perhaps while under pressure to do so from Saudi Arabia. (YASSER AL-ZAYYAT/AFP/Getty Images)
Viewpoints

Throughout its modern existence, Lebanon has frequently teetered on the edge of disaster—and more than occasionally tumbled into the gulf.

With a population divided between Christians and Sunni and Shia Muslims, the political structure reflects this circumstance. The President, for example, has to be a Maronite Christian, the Prime Minister a Sunni Muslim, the Speaker of the Parliament a Shi’a Muslim, the Deputy Prime Minister and the Deputy Speaker of Parliament Eastern Orthodox. Until 1990 when the Taif Agreement ended the 1975-90 civil war, Christians held a 6 to 5 majority in parliament; the agreement evened the Christian-Muslim ratio.

Lebanon has not held a census since 1932 for fear of finding officially the reality—that the percentage of the Muslim population has increased significantly. Thus at its base Lebanon lives a lie with all of the consequences associated with such mendacity.

Despite these inherent tensions, Lebanon fared well until its 1975-90 civil war. The country was relatively calm and renowned as prosperous, characterized by tourism, agriculture, commerce, and banking.

Financial power and diversity prompted the sobriquet “Switzerland of the East” during the 1960s, and Beirut, as a tourist playground for Arabs to loosen the shackles of their national rules, resulted in being labeled “the Paris of the Middle East.” Or, “What happened in Beirut, stayed in Beirut.”

Sectarian tension in 1975 culminated in the civil war between Christians and Muslims. Christians asked for and received Syrian intervention to calm the fighting (but getting the Syrians in was much easier than getting them out).

A major effort was directed at removing PLO members. A Multinational Force, including United States, France, Italy, and the UK oversaw its removal in 1982. In the eyes of Lebanese, however, the MLF morphed into being a catspaw for Israel, and suicide truck bombers in October 1983 blew up the Marine barracks killing 220 Marines of 1st battalion/8th Marines and other U.S. servicemen, making this incident the deadliest single-day death toll for the Marine Corps since Iwo Jima.

Simultaneously, truck bombers blew up the French barracks, killing 55 French troops. This disaster followed the April 1983 attack on the U.S. embassy that effectively destroyed it, killing 63 Americans and Lebanese.

Understandably, the U.S. government has been uninterested in further military intervention either unilateral or multilateral.

The 1989 Taif agreement, brought peace—at a price. All militias were disbanded—except Hezbollah. And Hezbollah is regarded as a terrorist organization by many, including the United States, Israel, Saudi Arabia, and other Arab states.

The country has staggered along for 25 years—a collection of swords piled like jackstraws. Never short of drama, in February 2005 former Prime Minister Rafik Hariri (father of the current prime minister) was assassinated by a massive car bomb. One positive was popular reaction to the bombing forced the long-overdue withdrawal of Syrian forces.

The last decade has seen Lebanon struggling to recover both economically and politically with politicians serving as proxies for Iran (President Michel Aoun) and Saudi Arabia (Prime Minister Hariri) in their fighting in Syria and elsewhere in the region.

One consequence has been over a million refugees exacerbating intercommunal tensions.

Hence to the current imbroglio. Hariri, who holds Lebanese, Saudi, (and, very quietly, French) citizenship, resigned on Nov. 4 (or maybe not), choosing to do so from Saudi’s capital Riyadh.

Such action generated a plethora of explanations and extrapolations. In various iterations, they included Hariri being kidnapped by the Saudis and forced to resign; Hariri attempting to pressure other Lebanese actors to force Hezbollah from power; and/or a Saudi attempt to force the Hariri family to surrender economic control of a business located in Saudi.

But Lebanese leadership insisted Hariri must return to Lebanon to resign officially. And, in an arrangement apparently brokered by French President Macron, Hariri (after various announced departure dates) appeared in Paris on Nov. 18 ending the international political equivalent of the child’s game “Where on Earth is Carmen Sandiego.”

So what next? Hariri’s professed desire to pressure removal of Hezbollah and concurrent Iranian political influence seems quixotic at best. Happily, the likelihood of another direct Hezbollah attack on Israel/massive Israeli riposte now seems unlikely.

Perhaps it was no more than a fit of nerves by an essentially nonpolitician who feared assassination (and left wife and children in Saudi). Theoretically, he plans a Nov. 22 return to celebrate Lebanese Independence Day—a date Americans remember as the day JFK was assassinated.